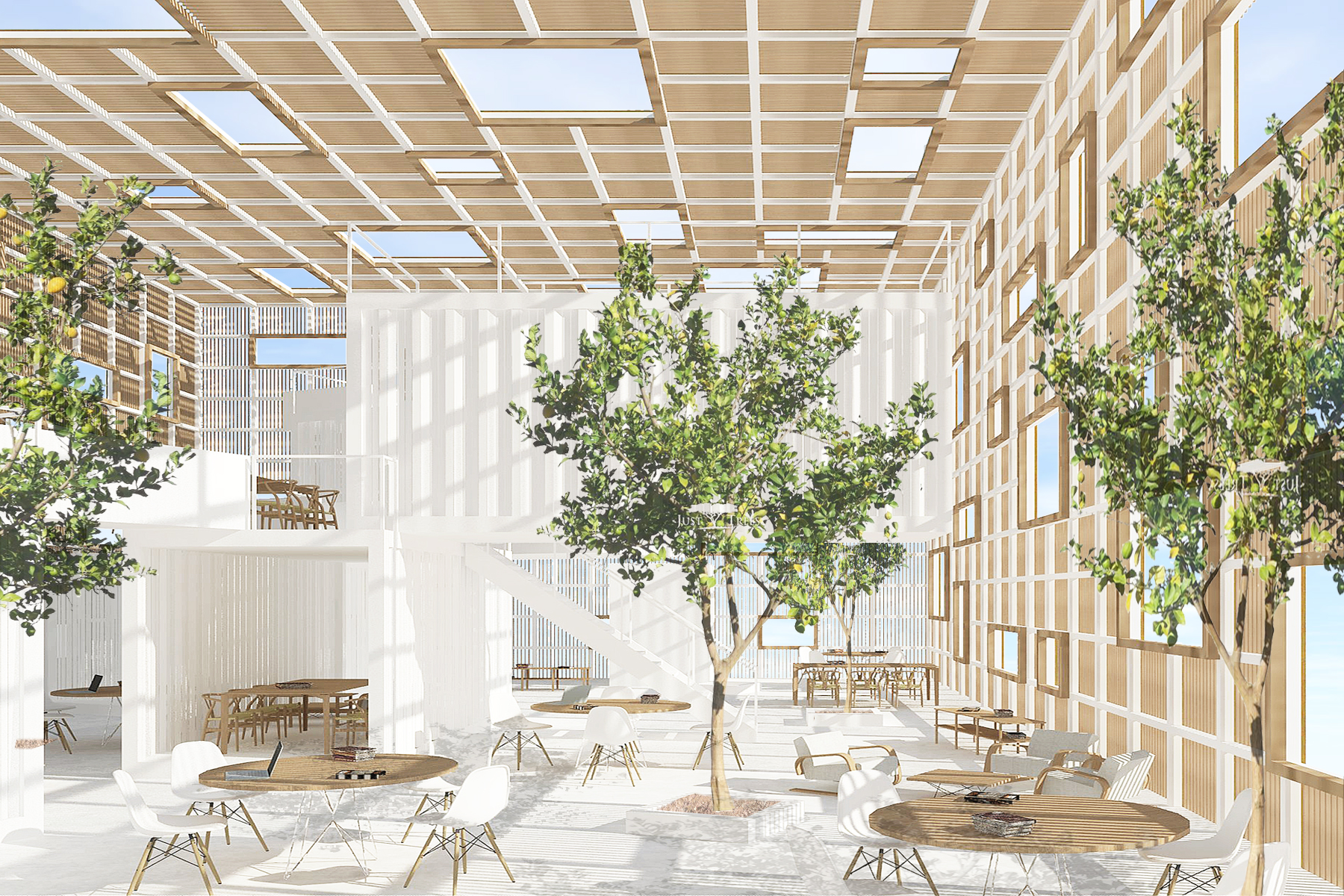 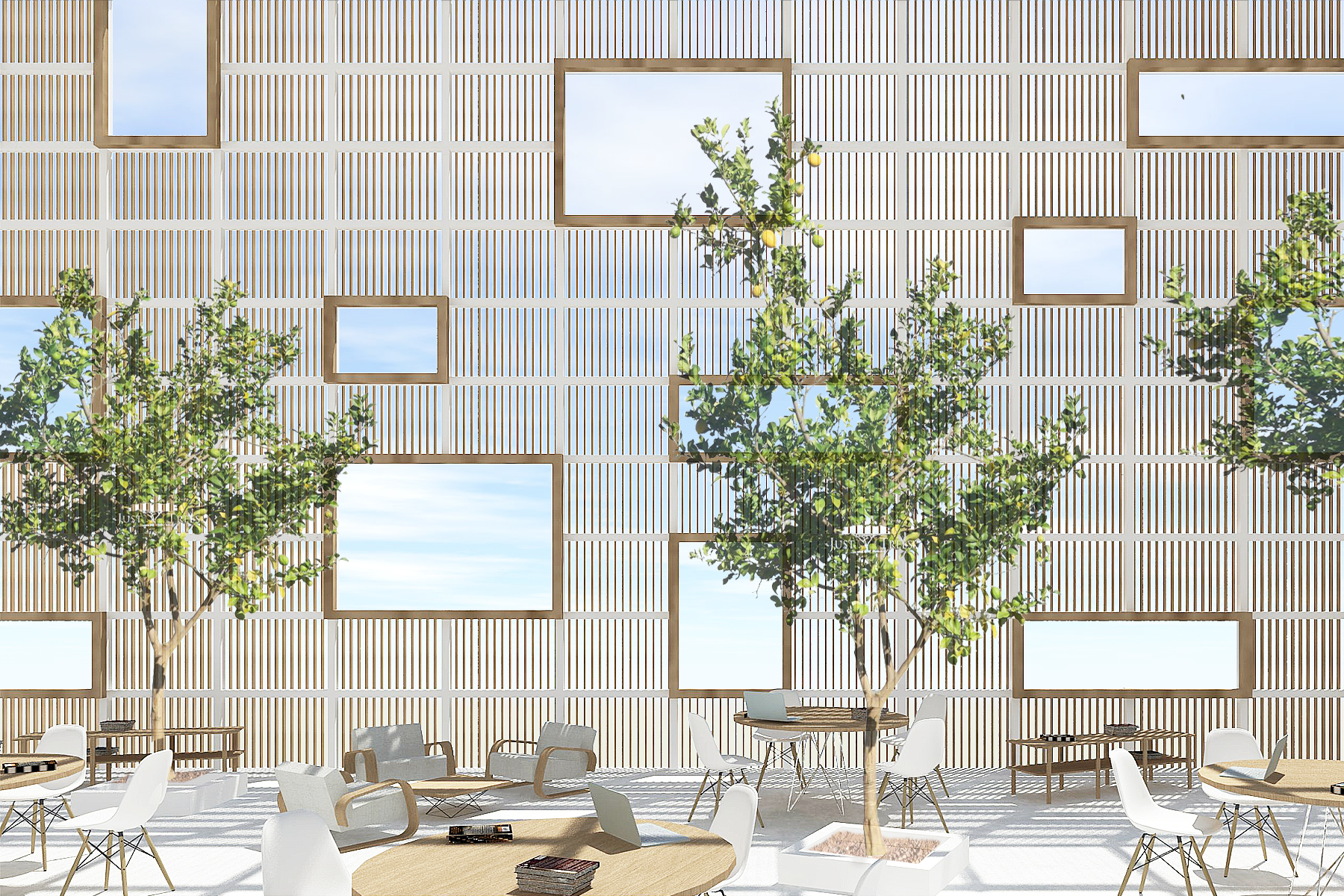 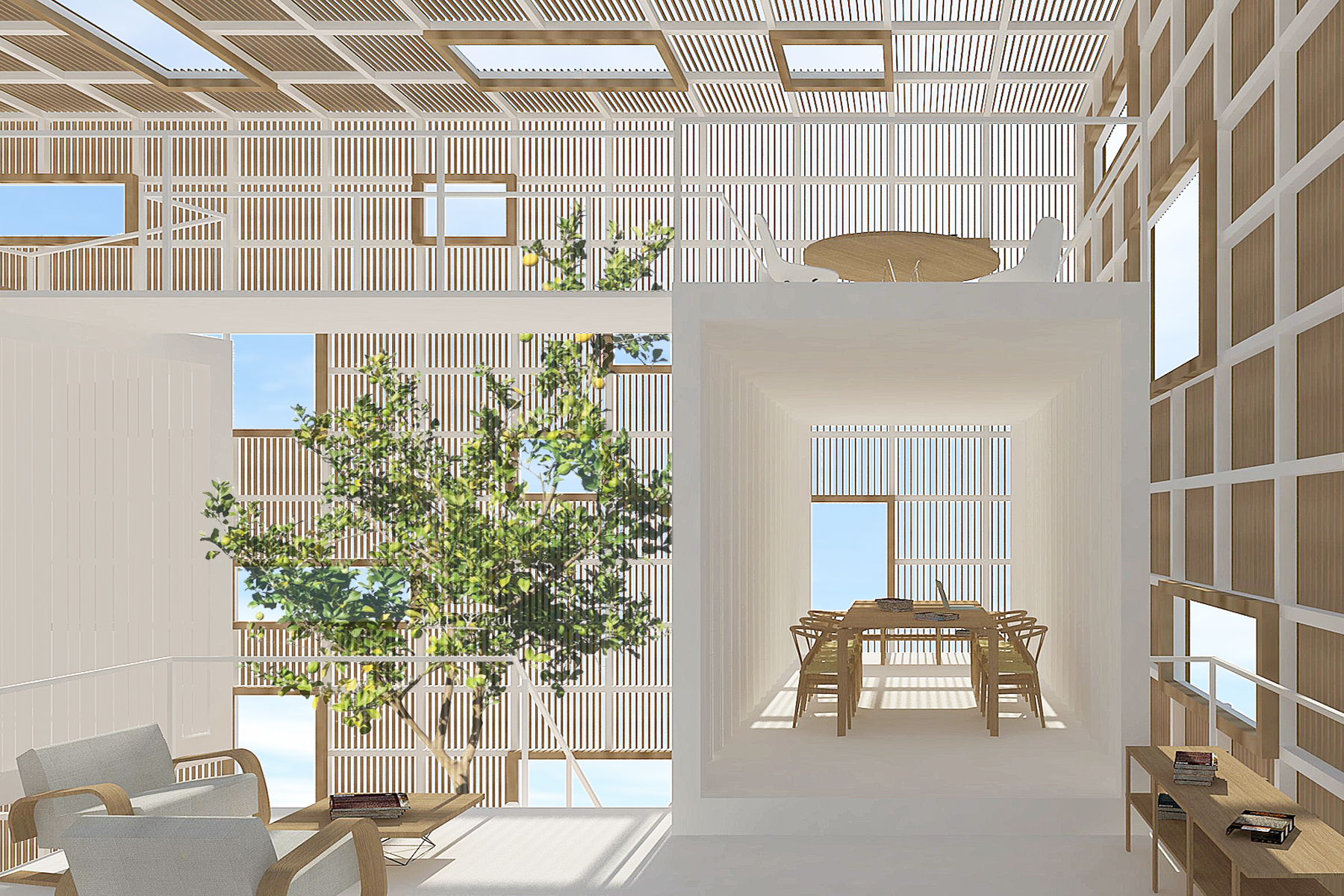 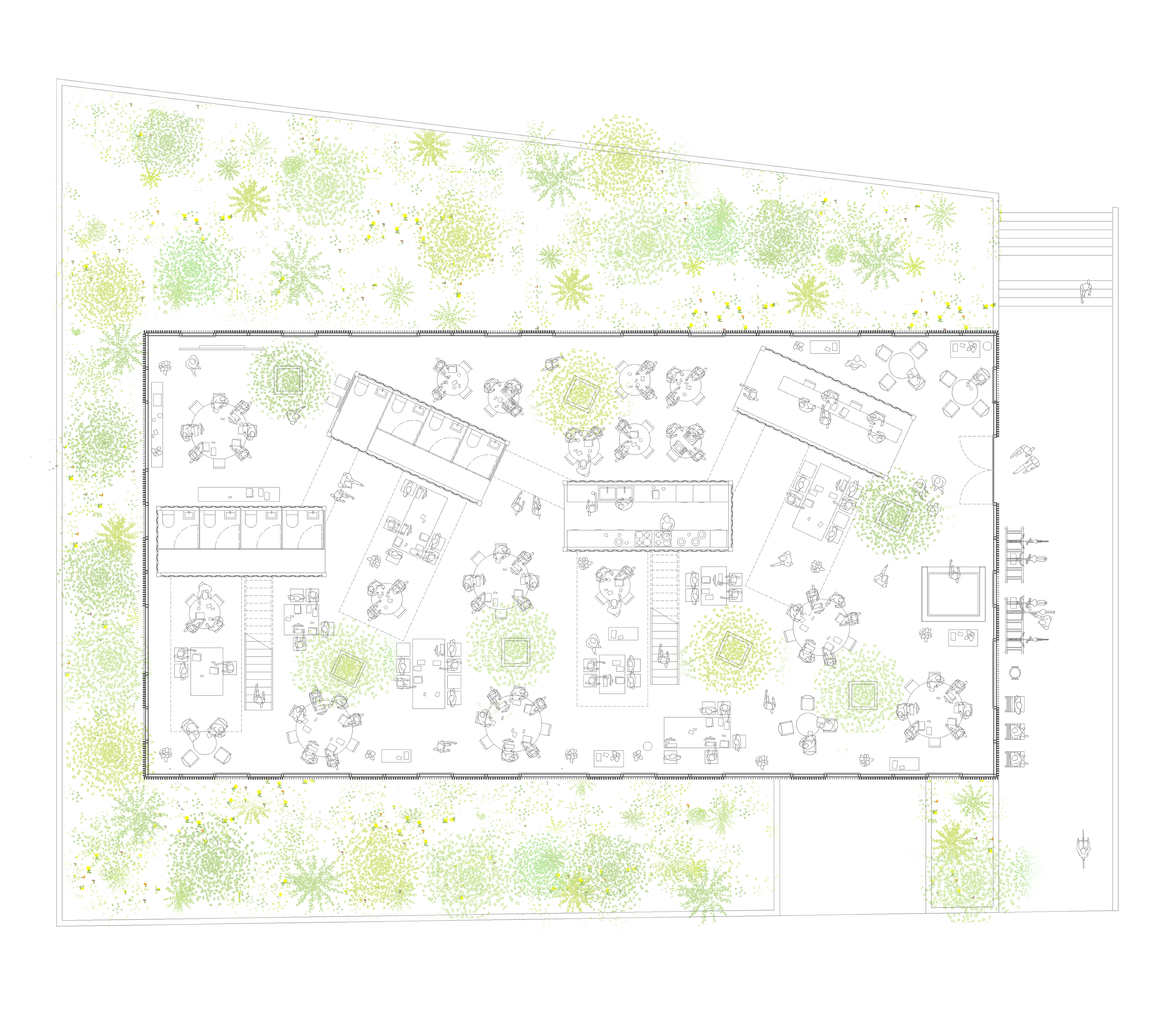 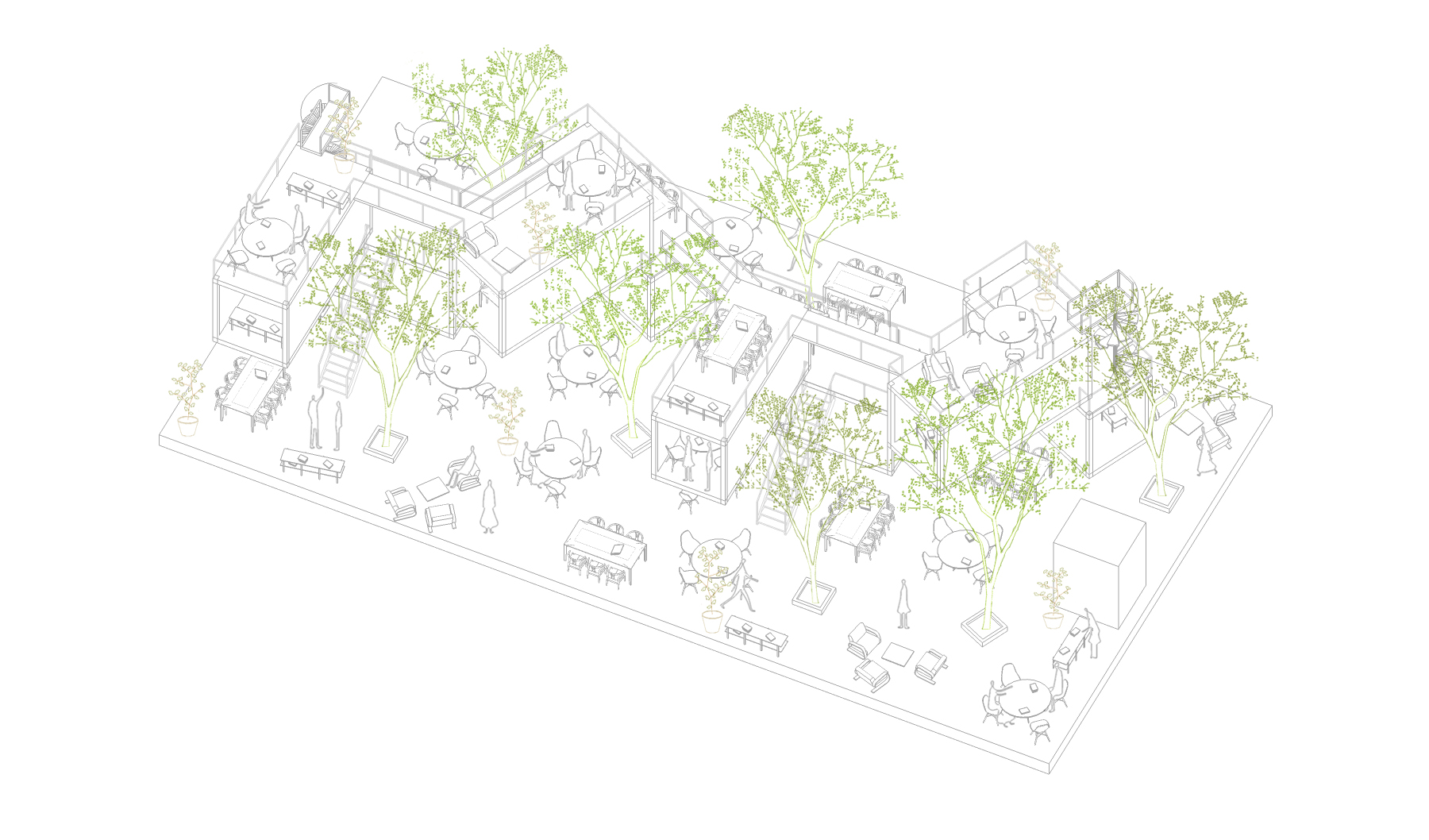 The project consists of a start-up offices located in Budaörs, a garden city forming part of the Budapest metropolitan area. It is a sloping plot that borders two streets at different levels. The main idea of ​​the project is to create an interior space that is lived as an exterior scenario, or vice versa, an exterior space that is lived as an interior scenario.

The building resolves the steep slope through a concrete plinth with parking use. An exterior ramp and stairway path absorbs the streets level difference while leading to the offices entrance in a tangential way from a higher level.

The offices volume consists of an open-plan space 10 meters high. The boundary between interior and exterior is made up of a light skin formed by a metallic framework covered with polycarbonate panels and wooden slats that filter natural light. The facade perforations allow natural light to enter and improve the building energy efficiency; favoring the greenhouse effect in winter and generating ventilation in summer. At the same time, the lemon trees clean the air, regulate the interior humidity and provide shade for the working areas.

A prefabricated system of overlapping marine containers painted white solves the offices program. On the ground floor, the volumes contain services such as the kitchen and the toilets, in addition to the reception. The apparently random position of the containers relates the different environments of entrance, restaurant, meeting room and working areas in a unique fluid space. On the upper floors, the walkways and containers give rise to working and resting atmospheres of greater privacy. The programmatic flexibility of the system allows adapting the different environments meeting the users’ needs.

In this way, the perception between interior and exterior is diluted in a set of volumes within a single volume. At the same time, the game of light and nature enriches the working life of people.