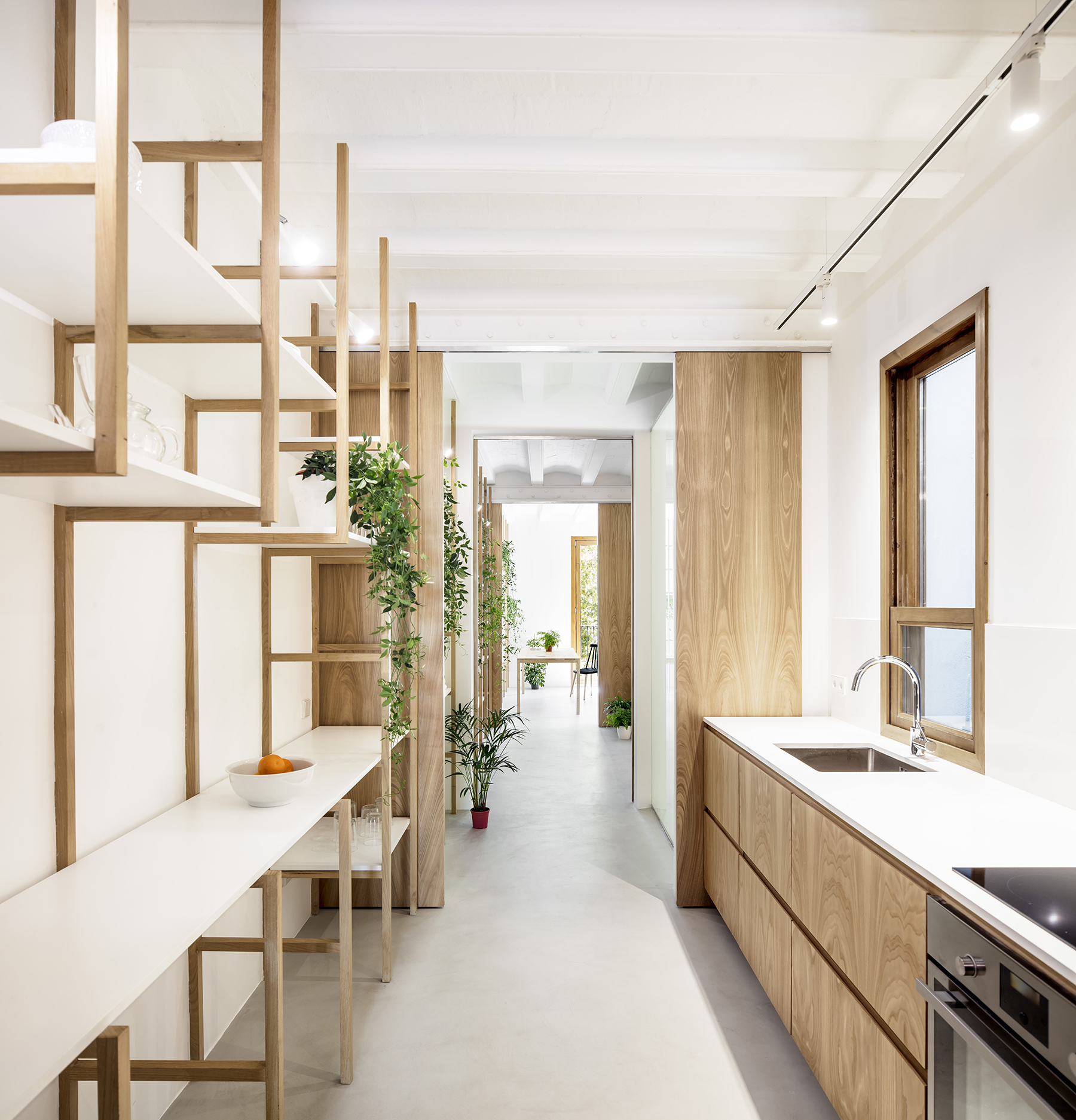 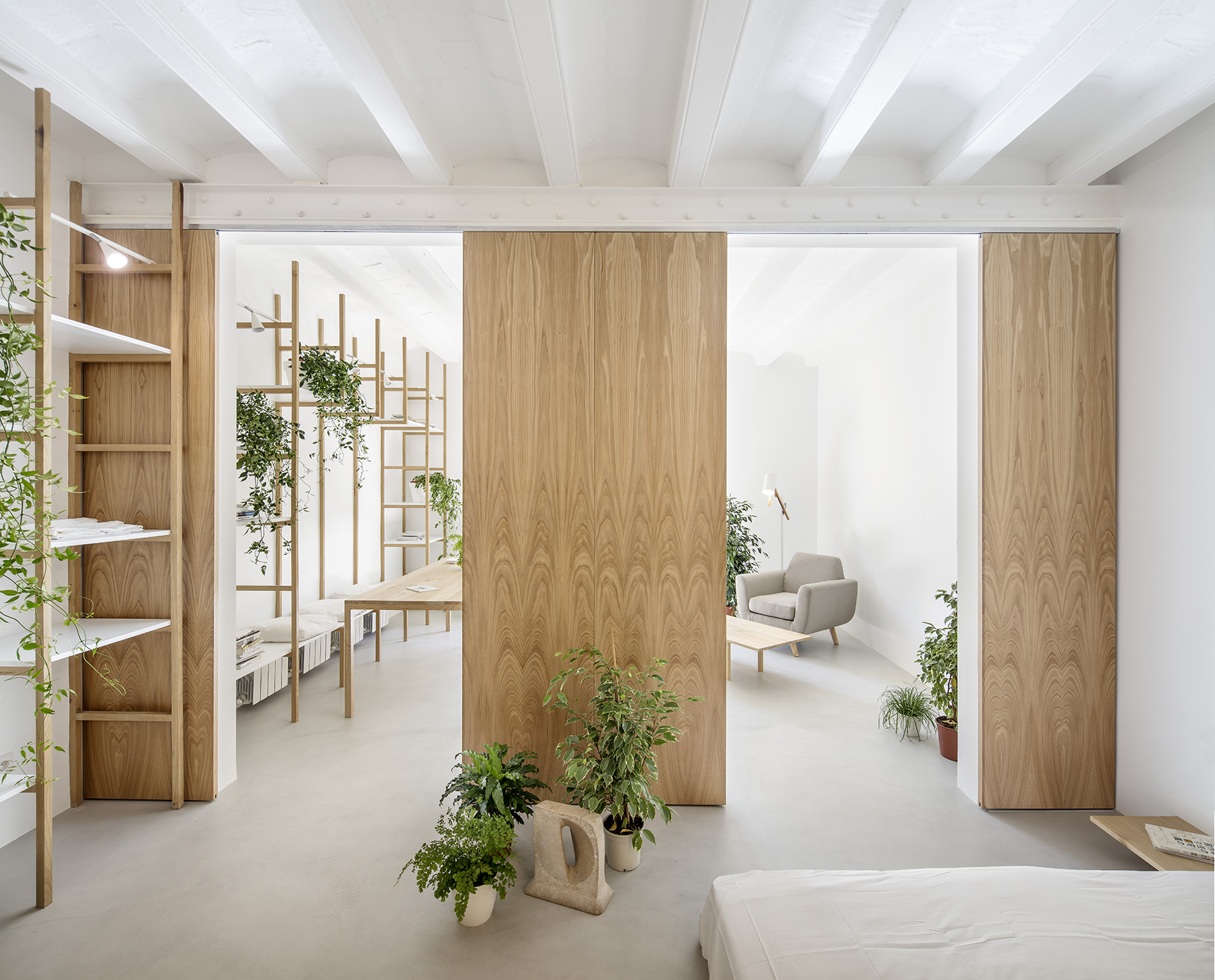 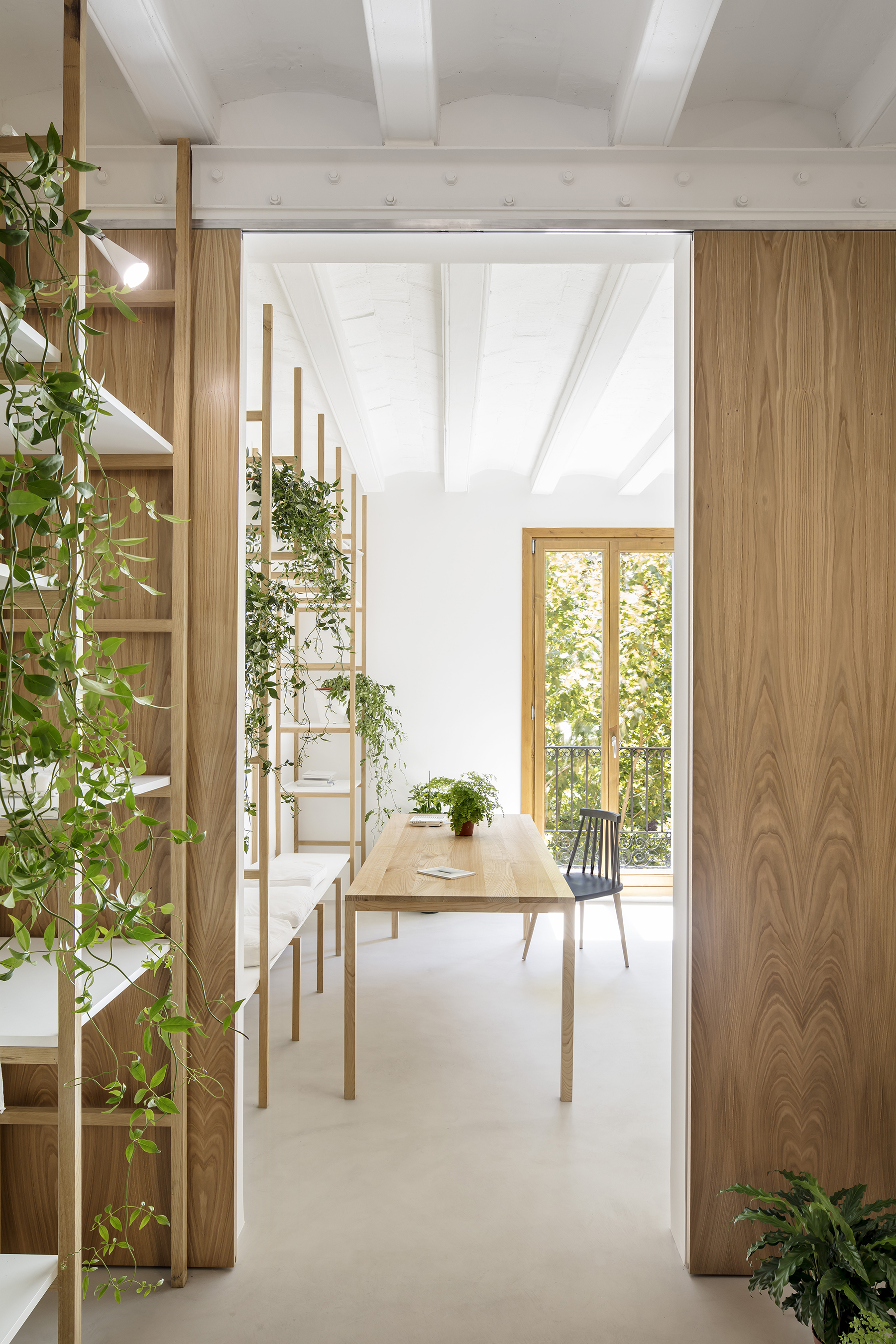 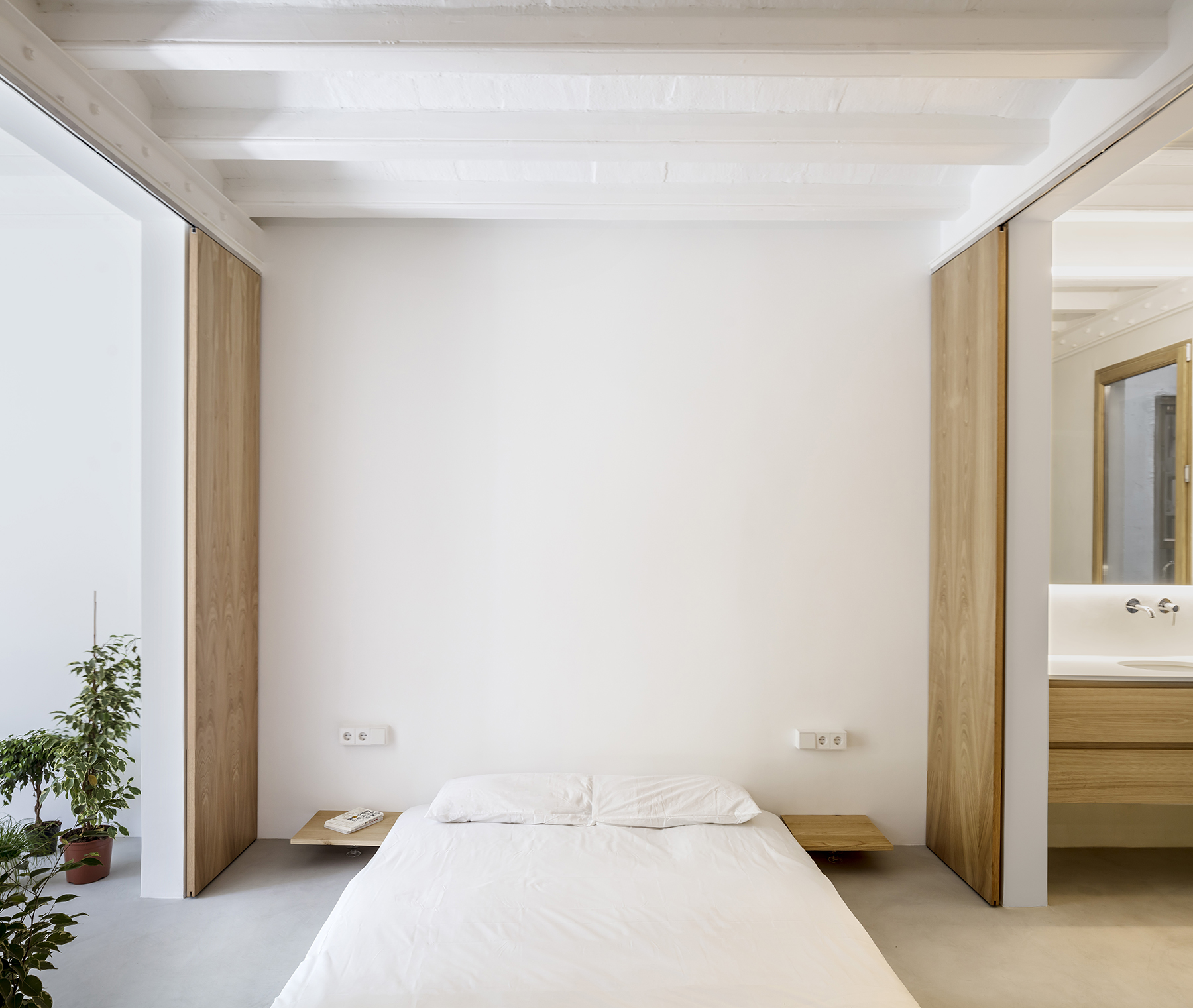 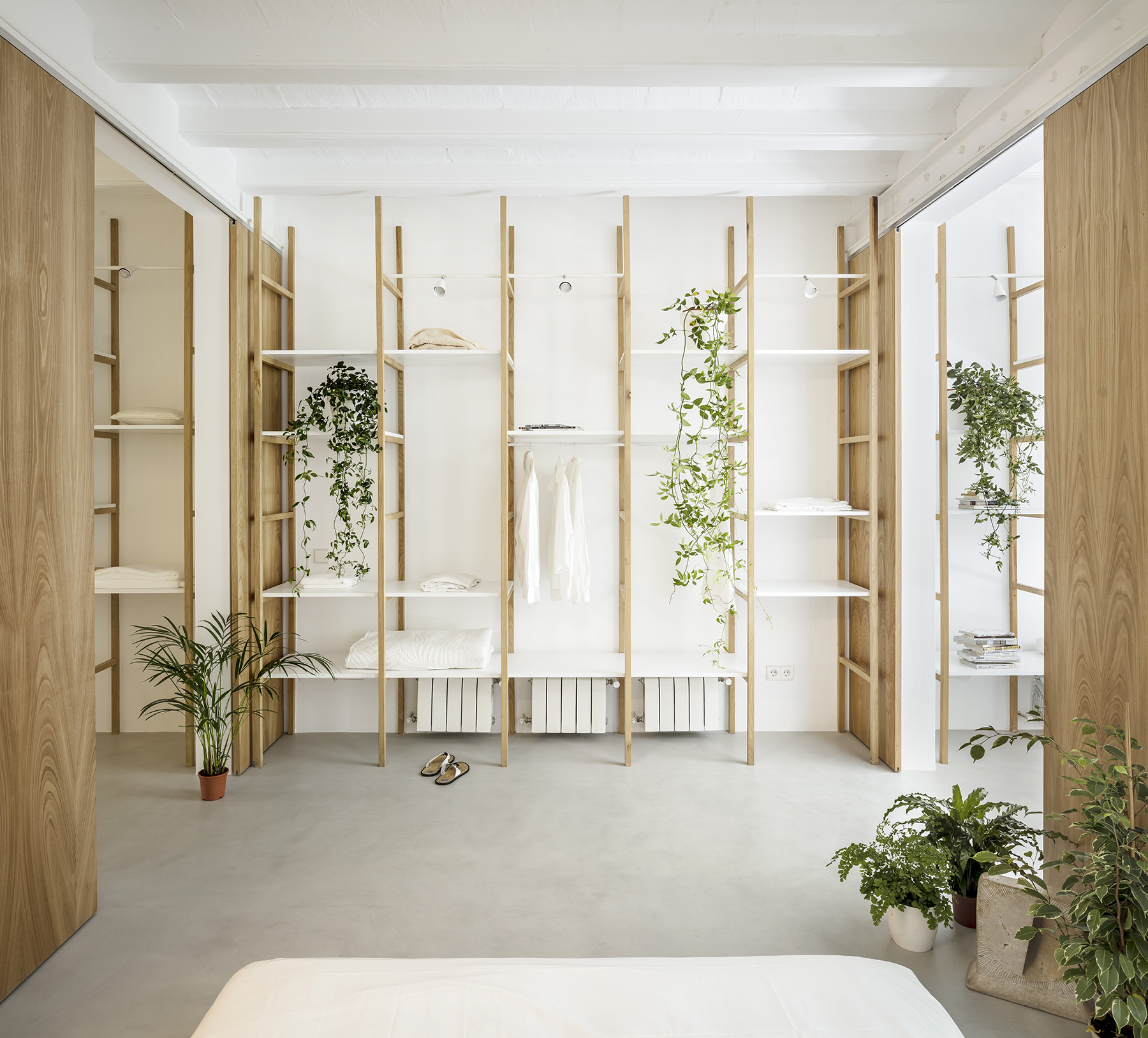 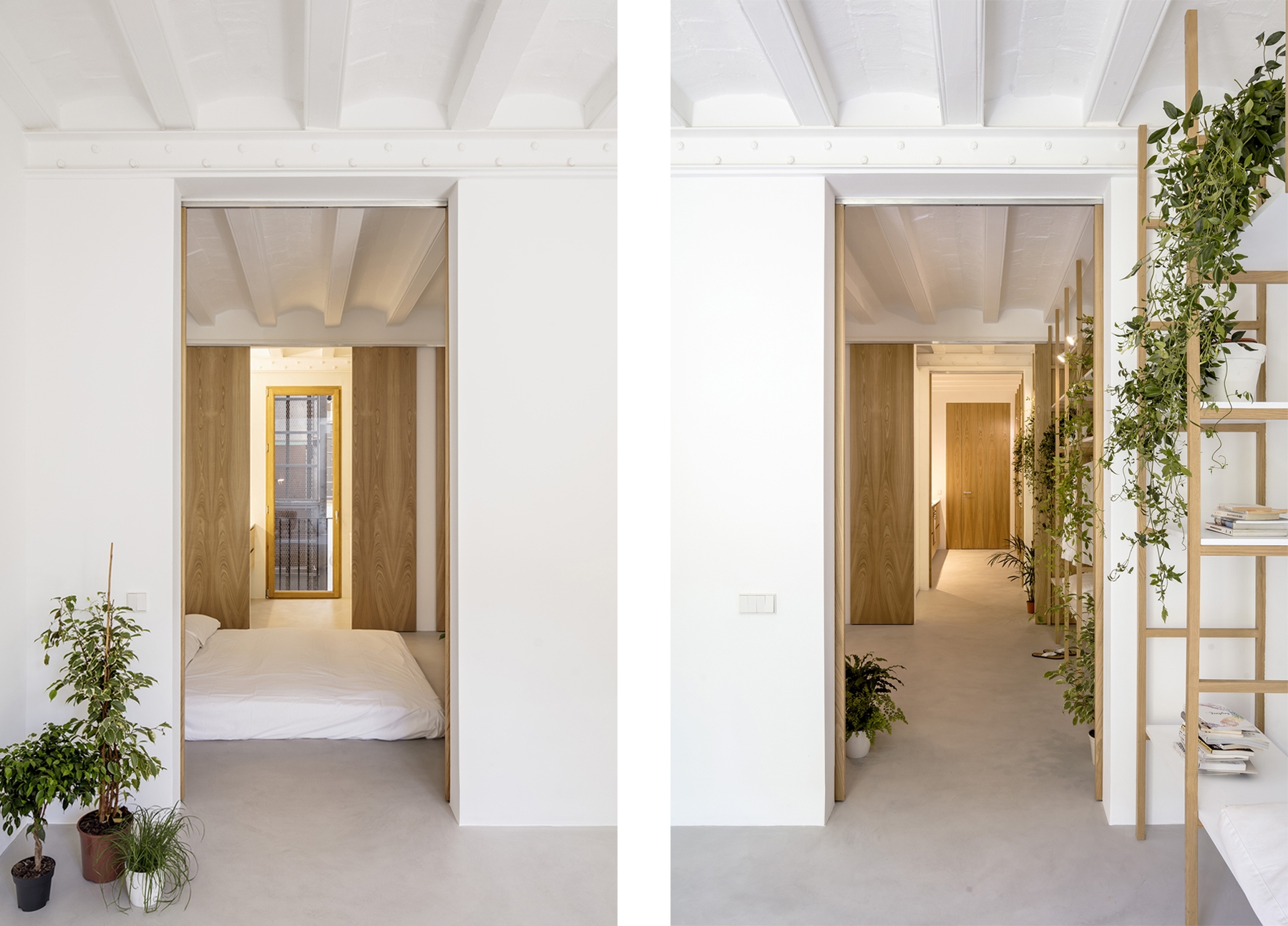 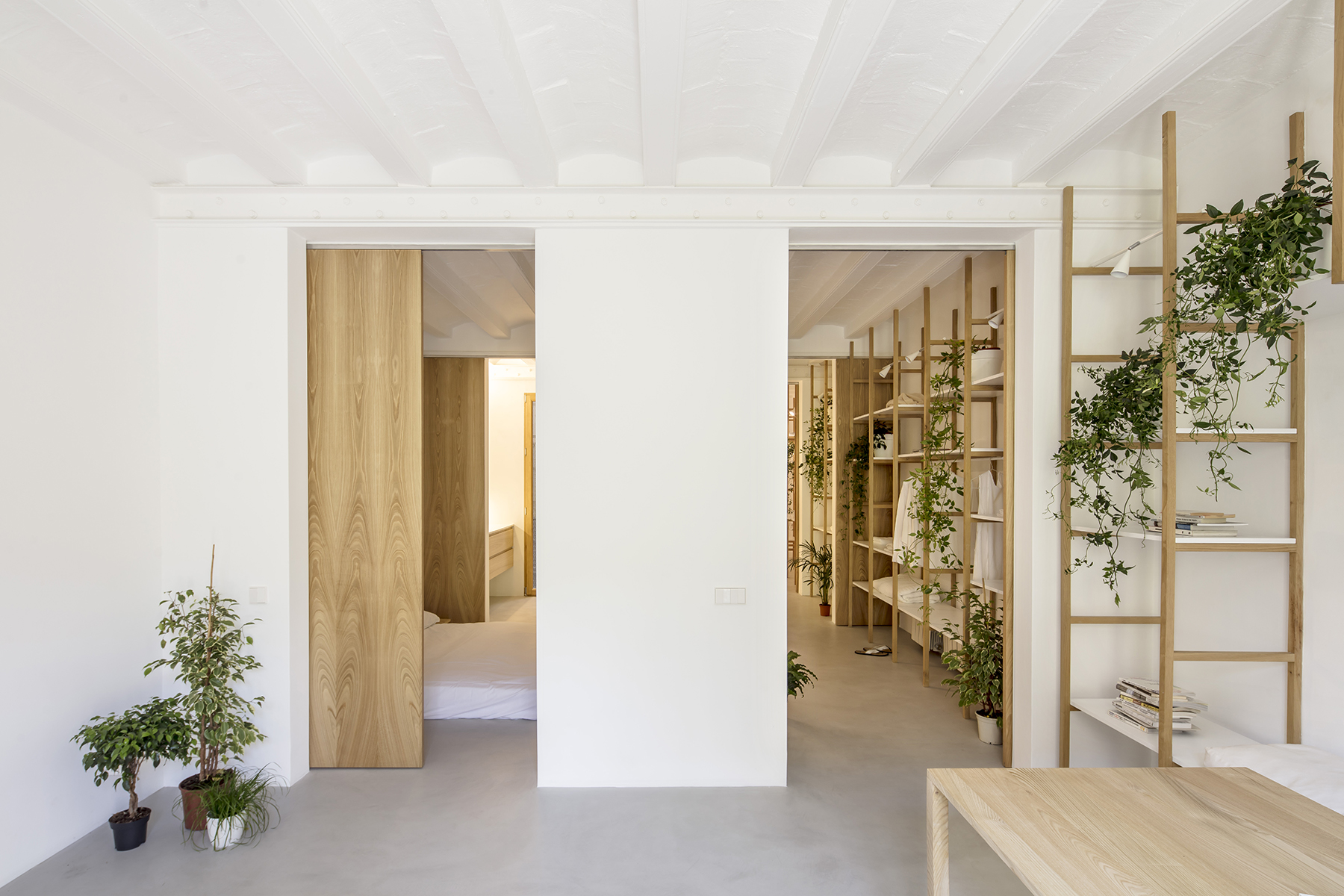 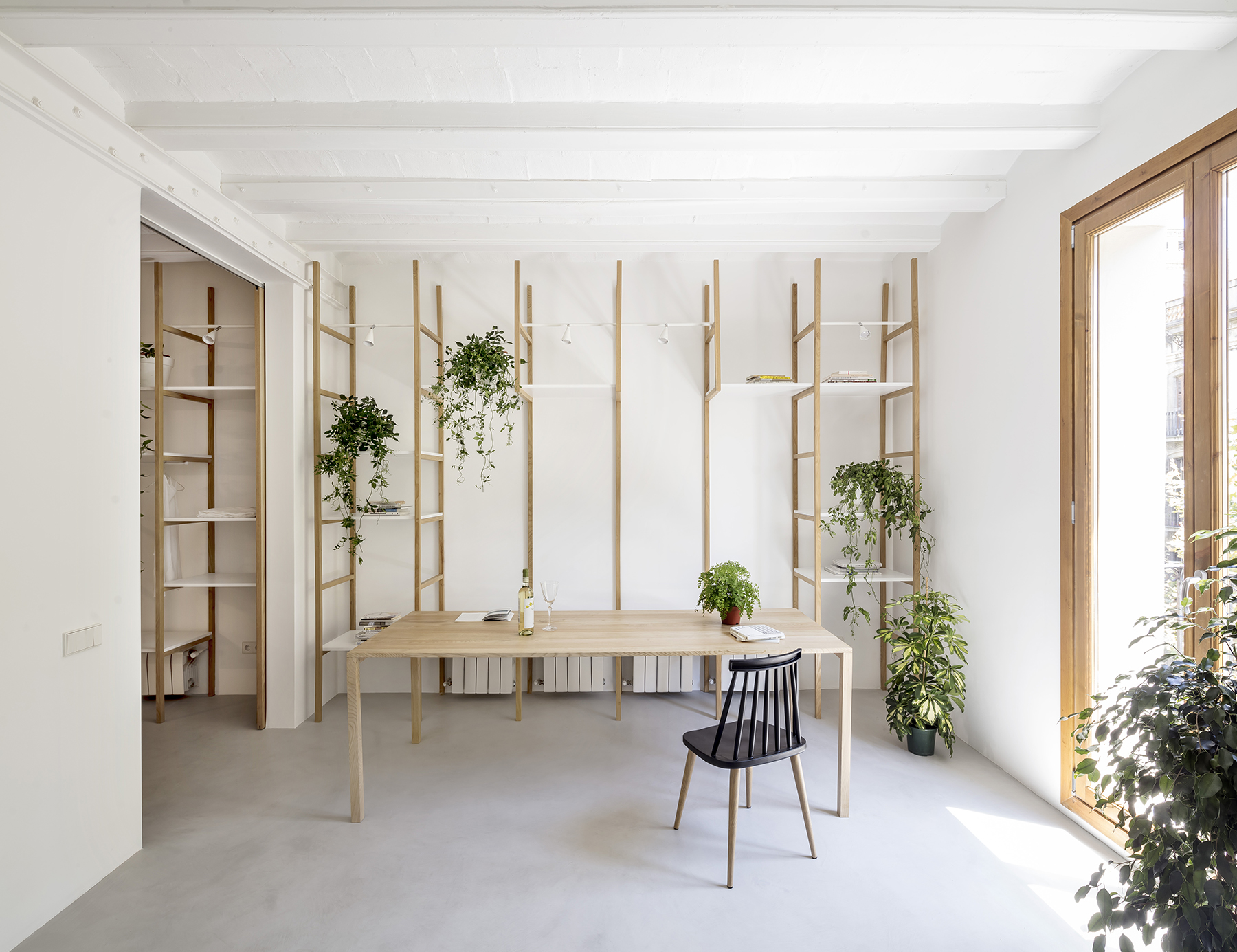 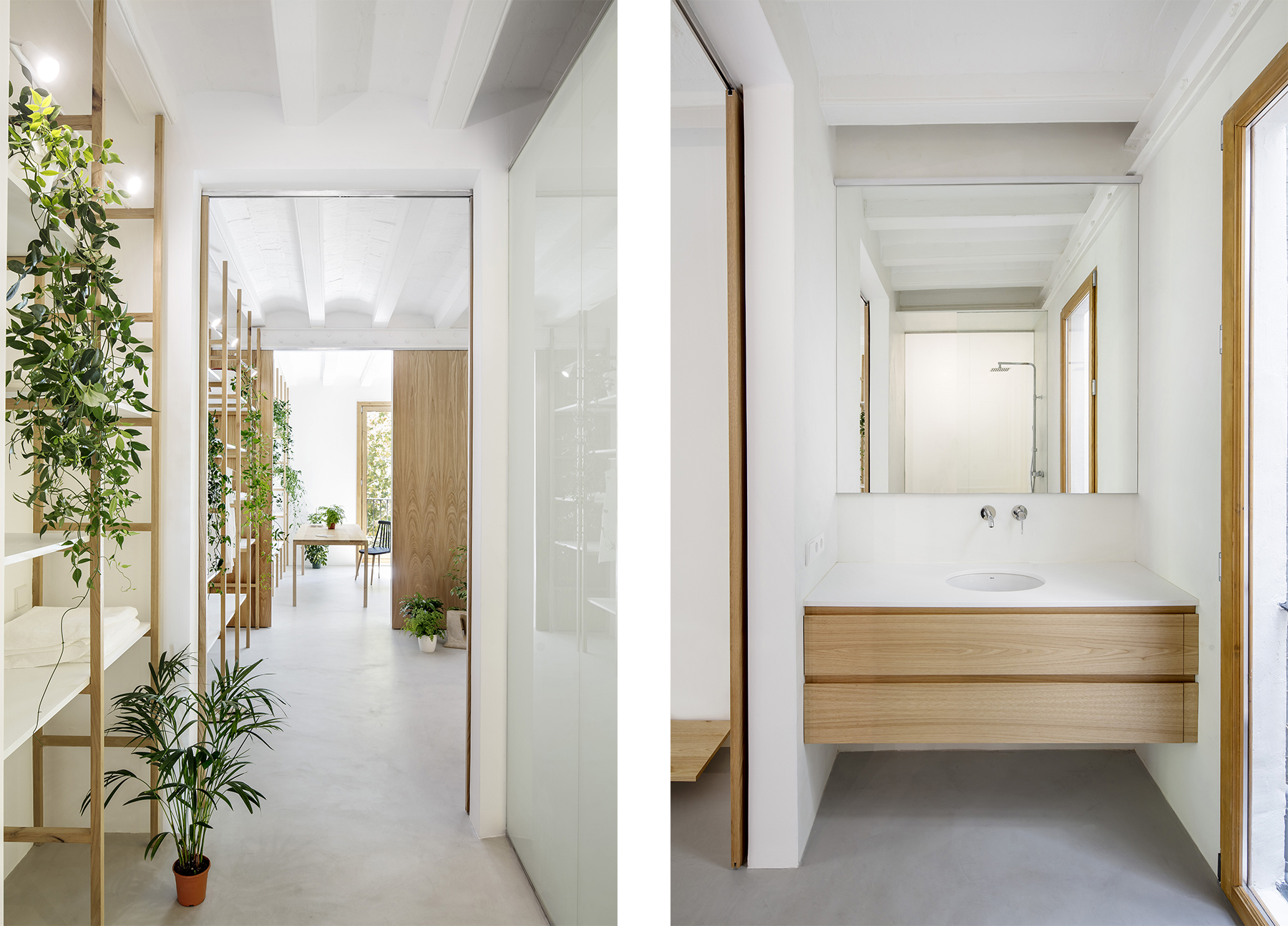 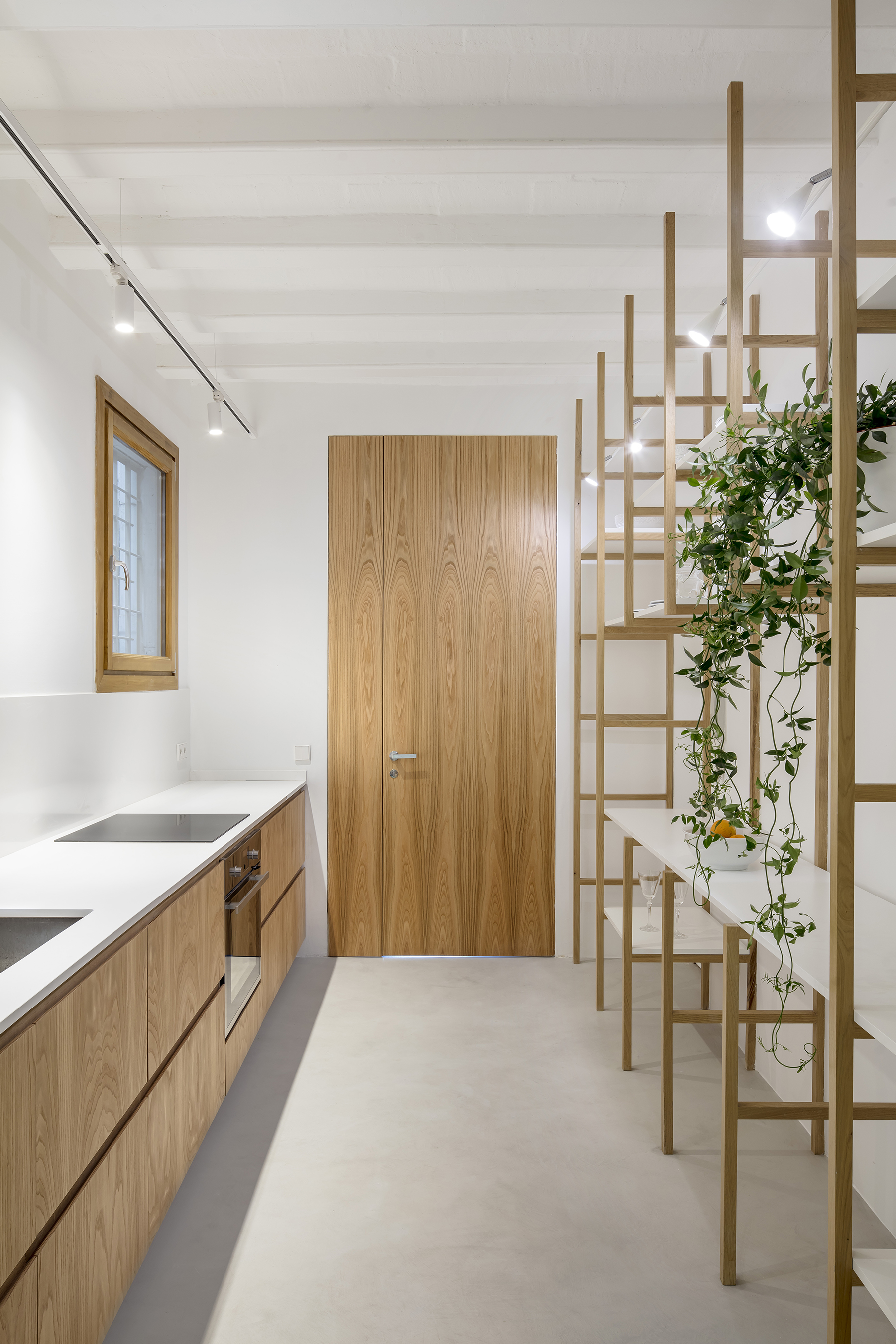 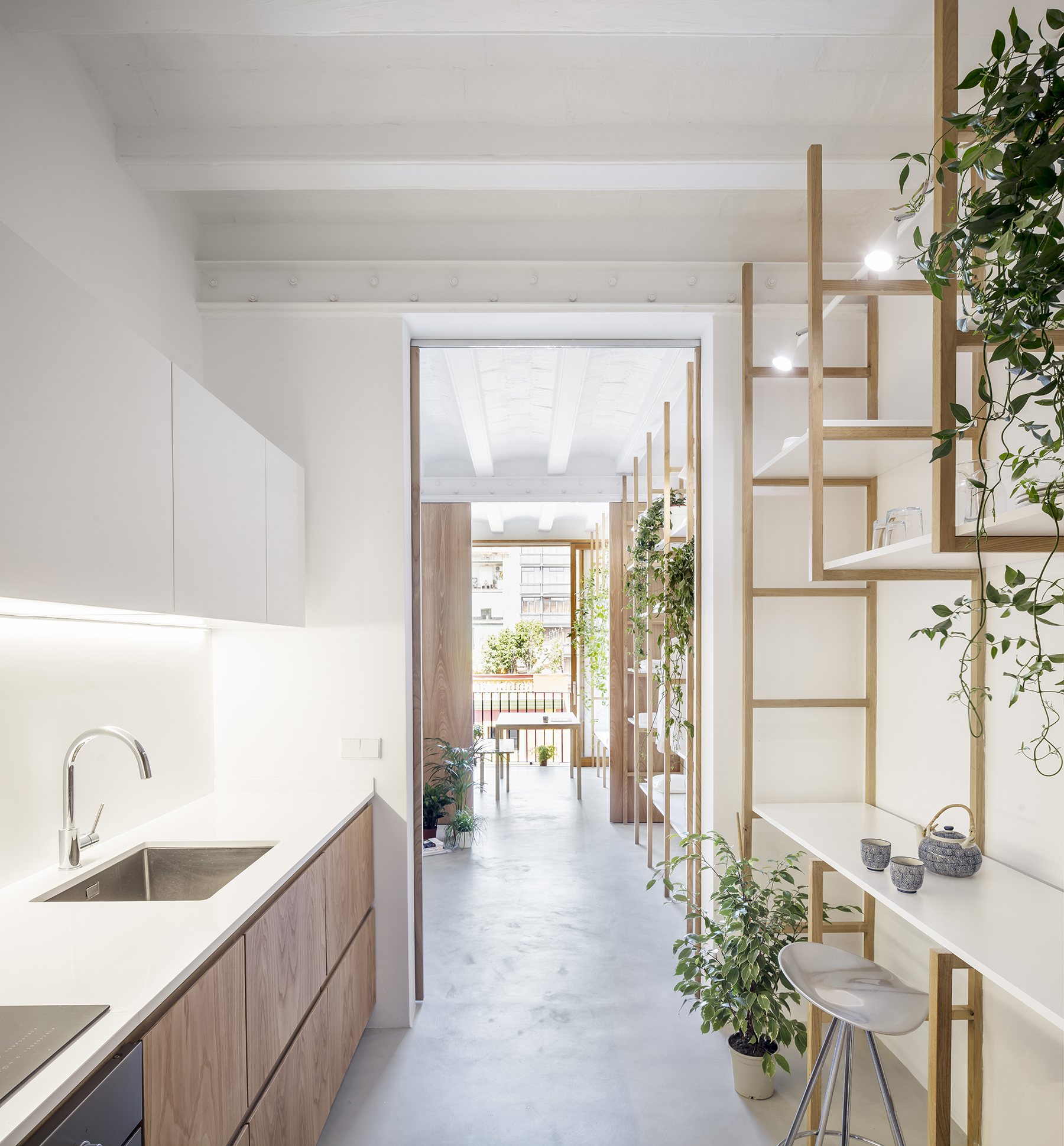 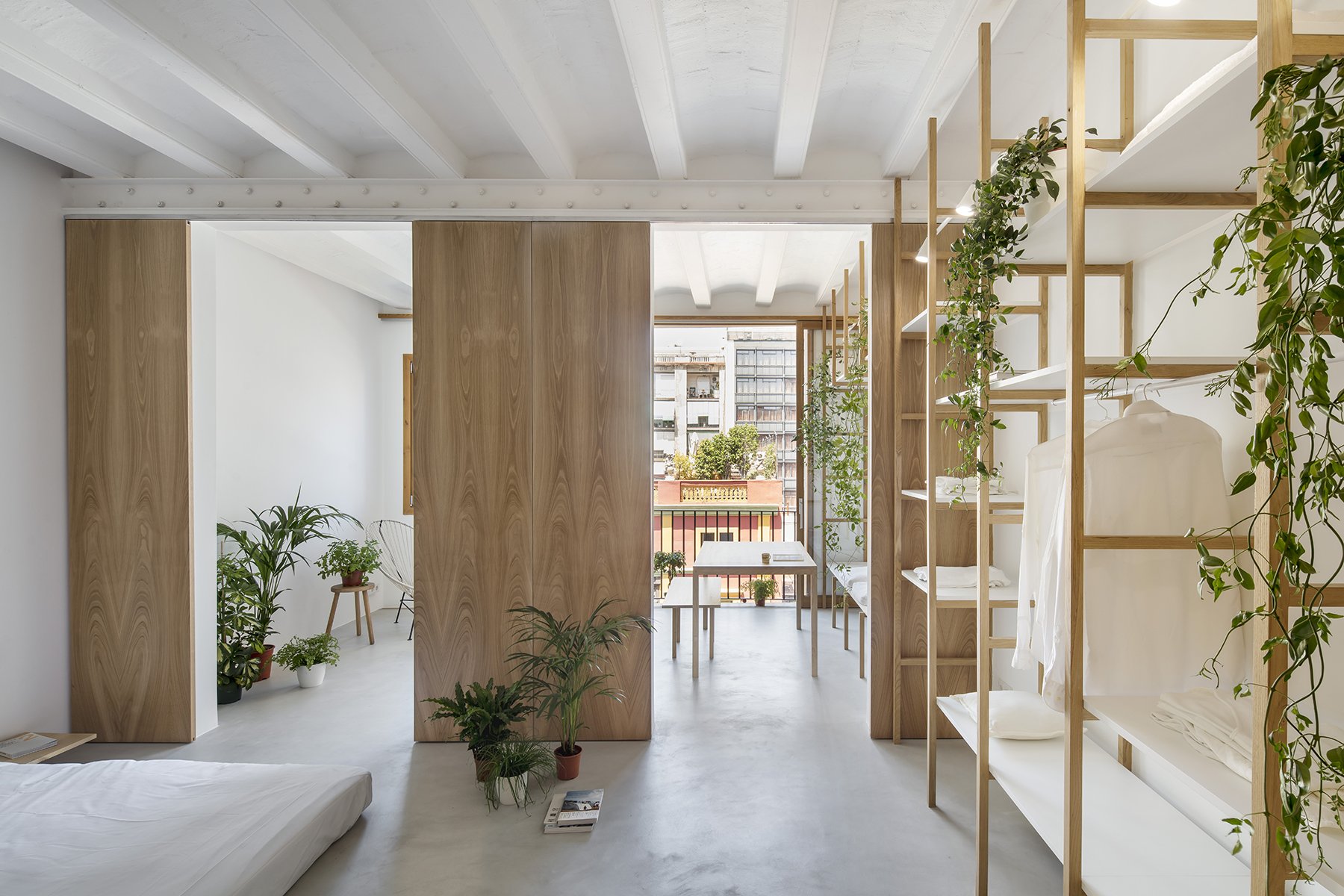 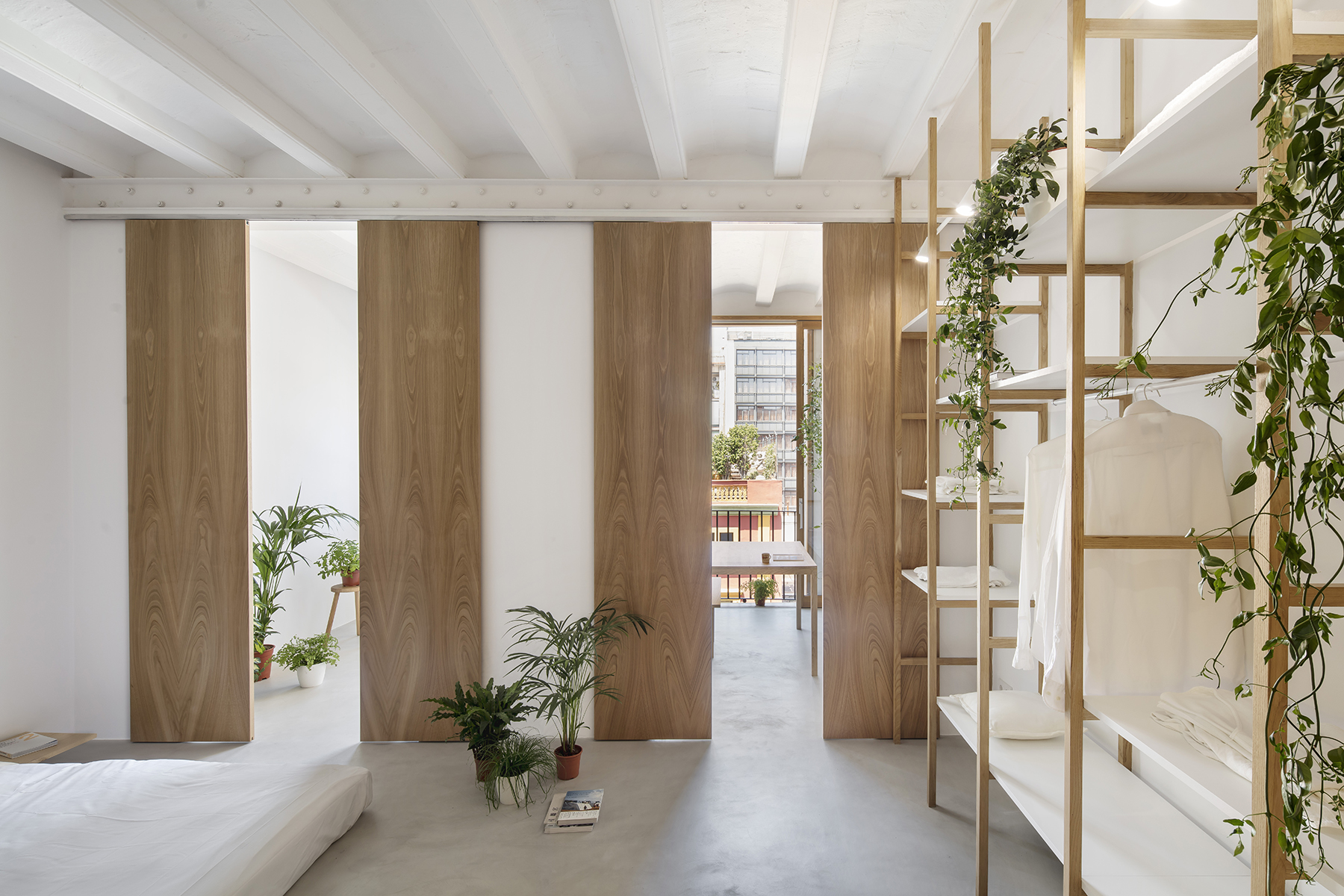 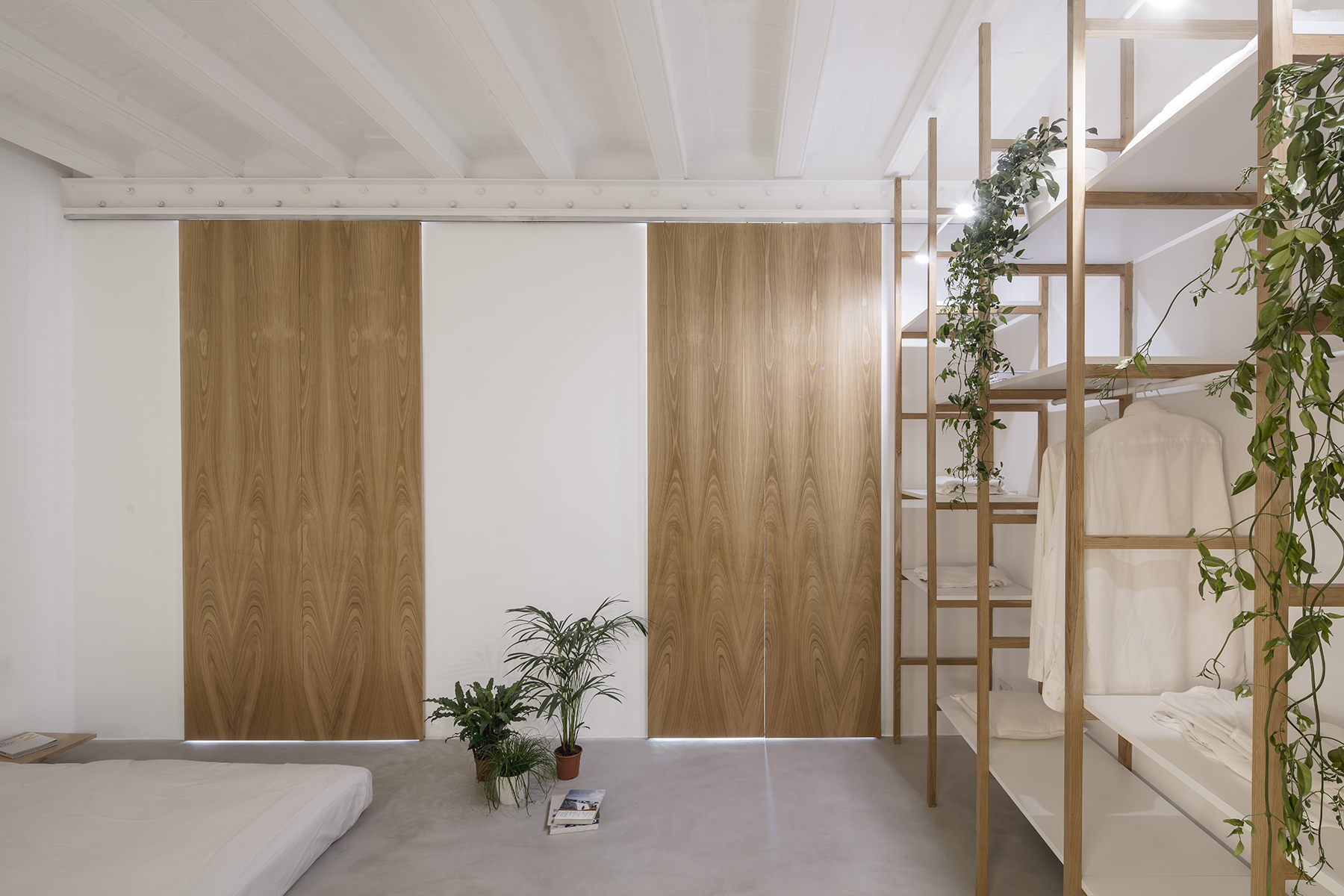 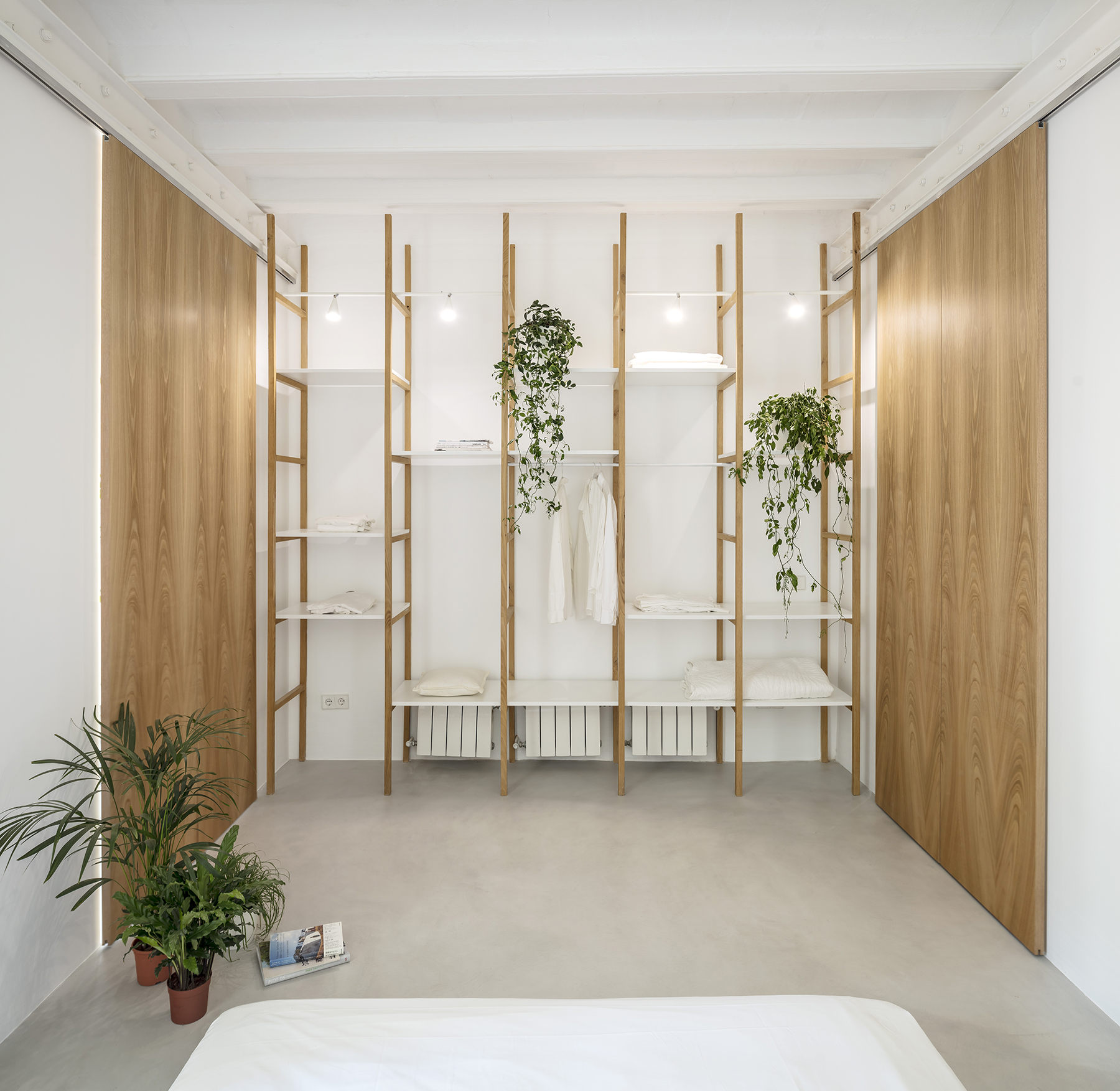 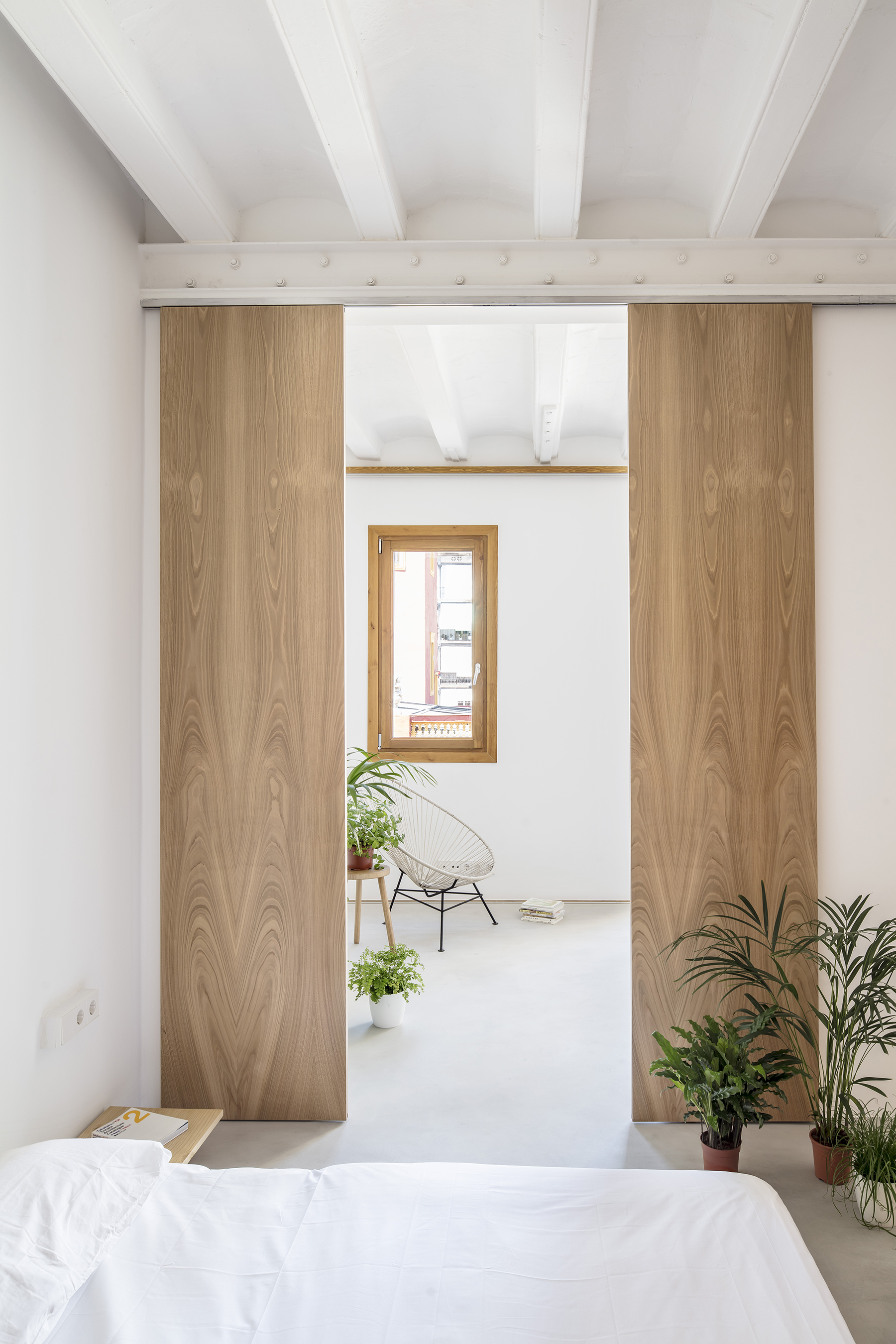 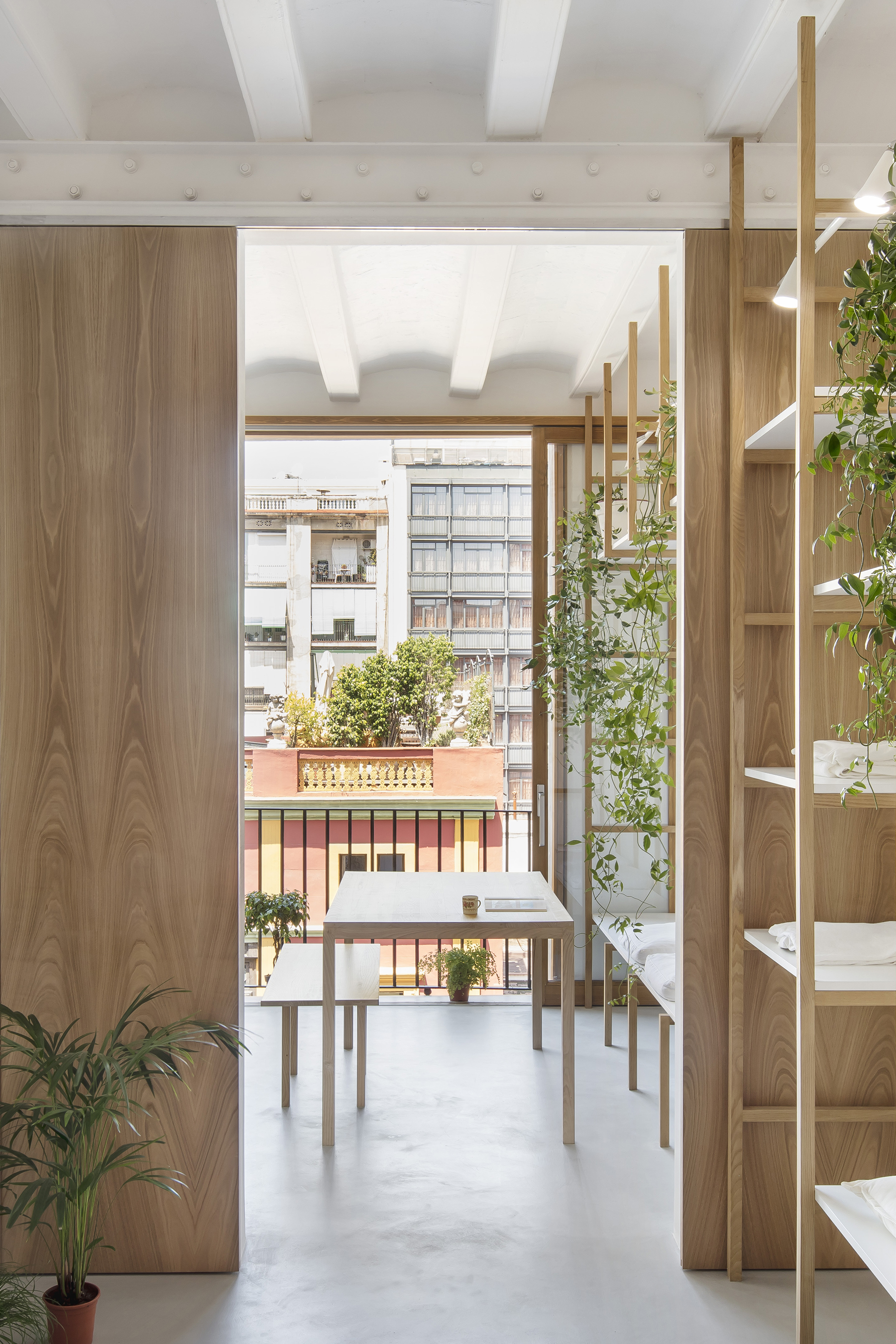 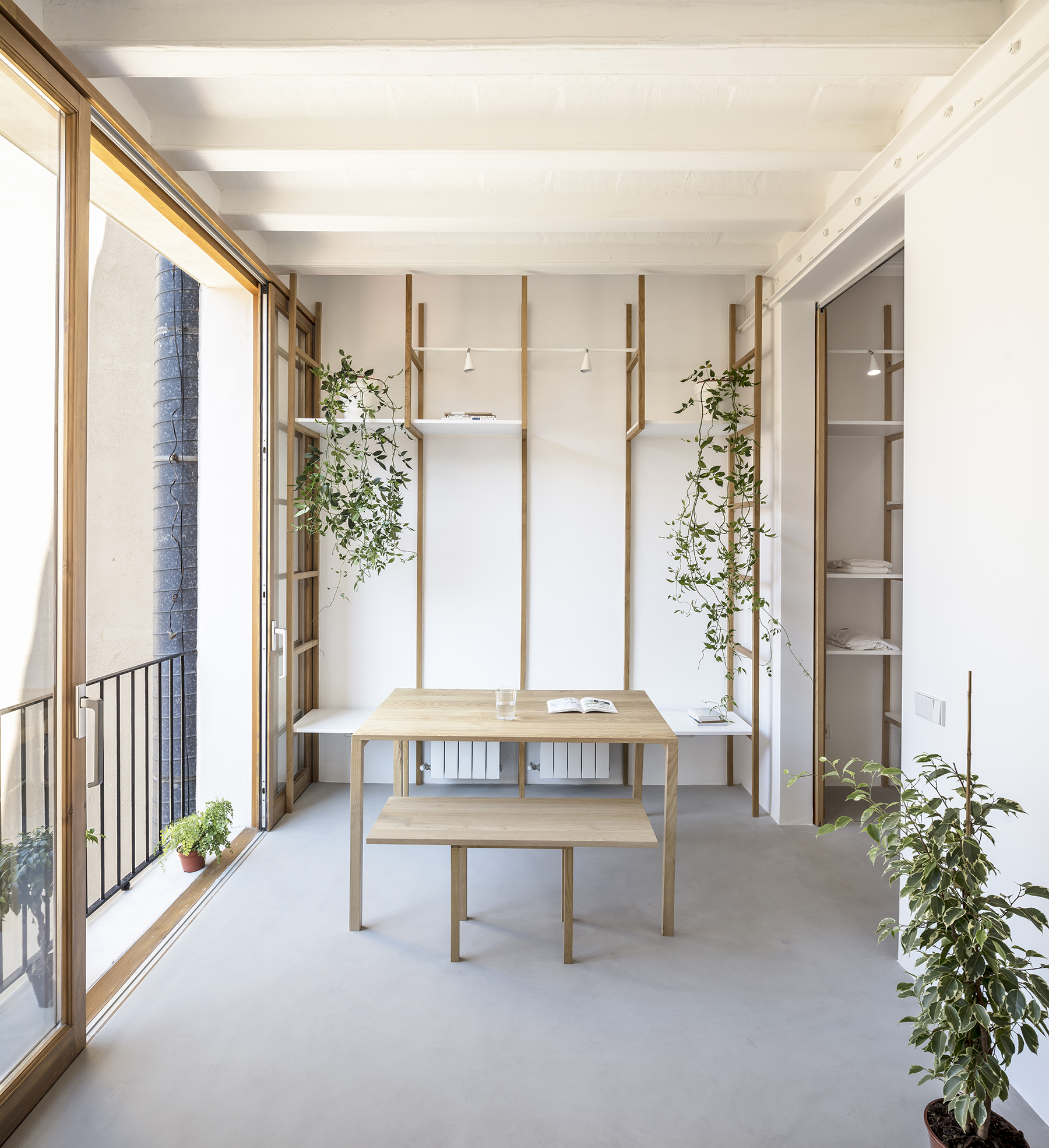 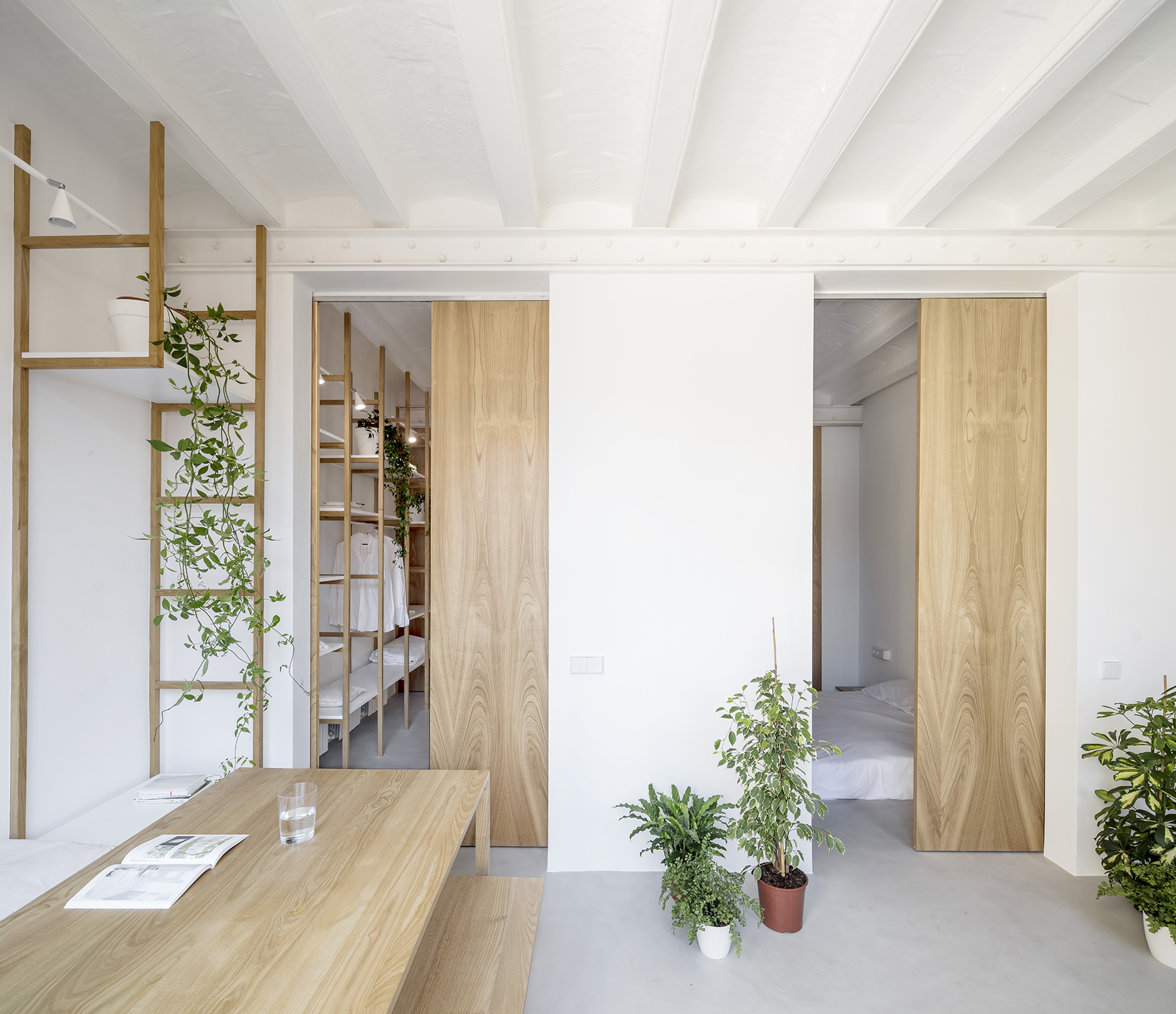 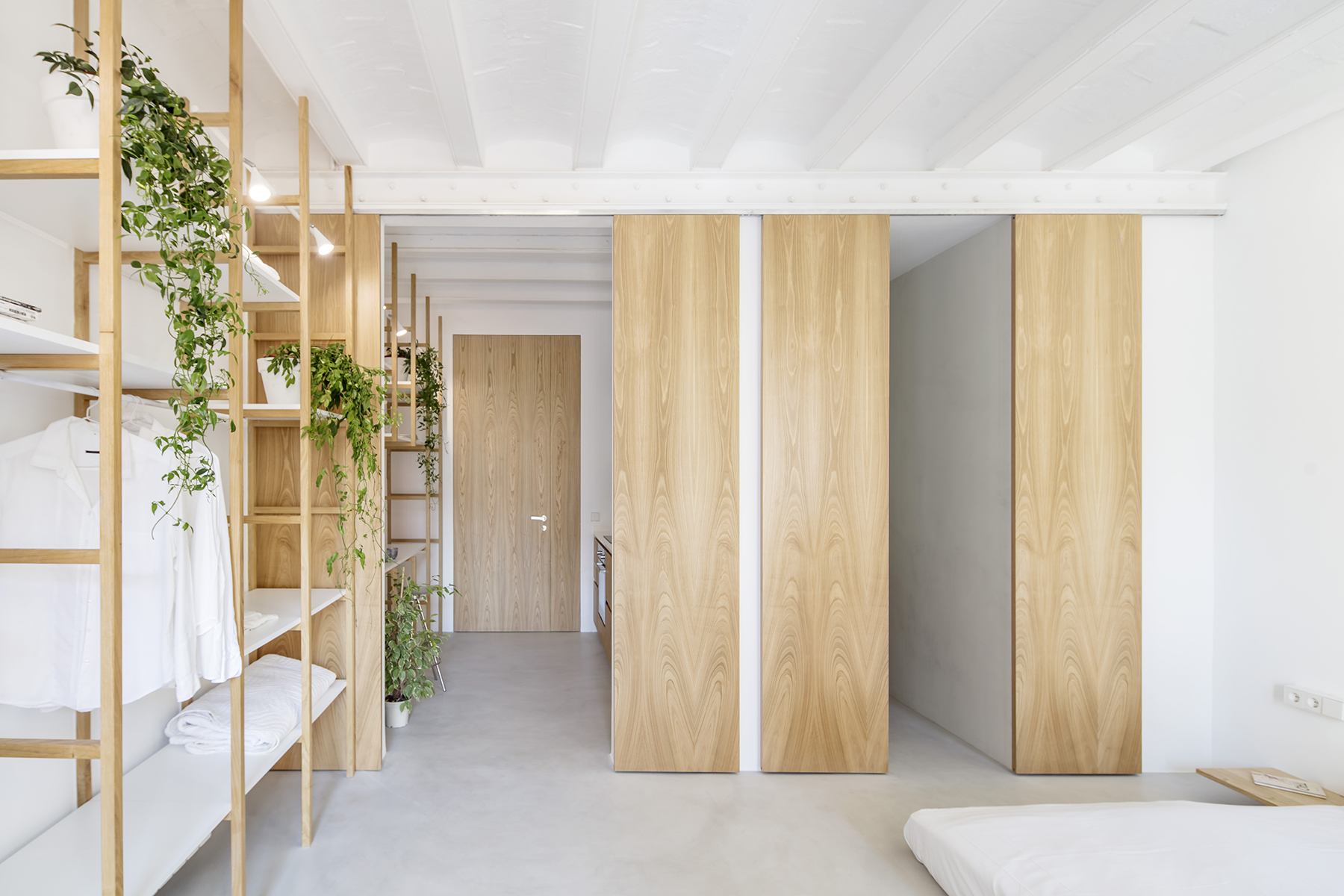 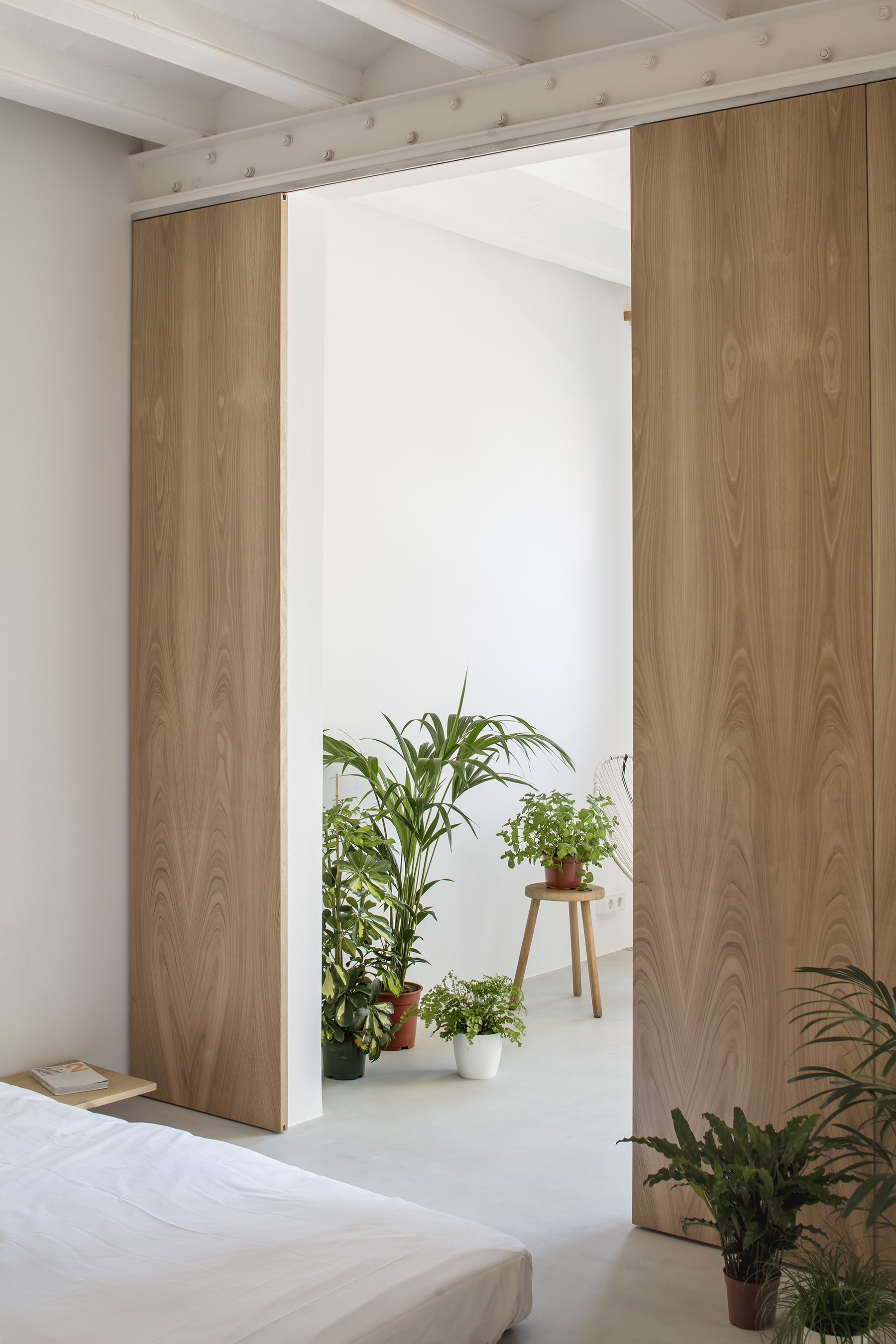 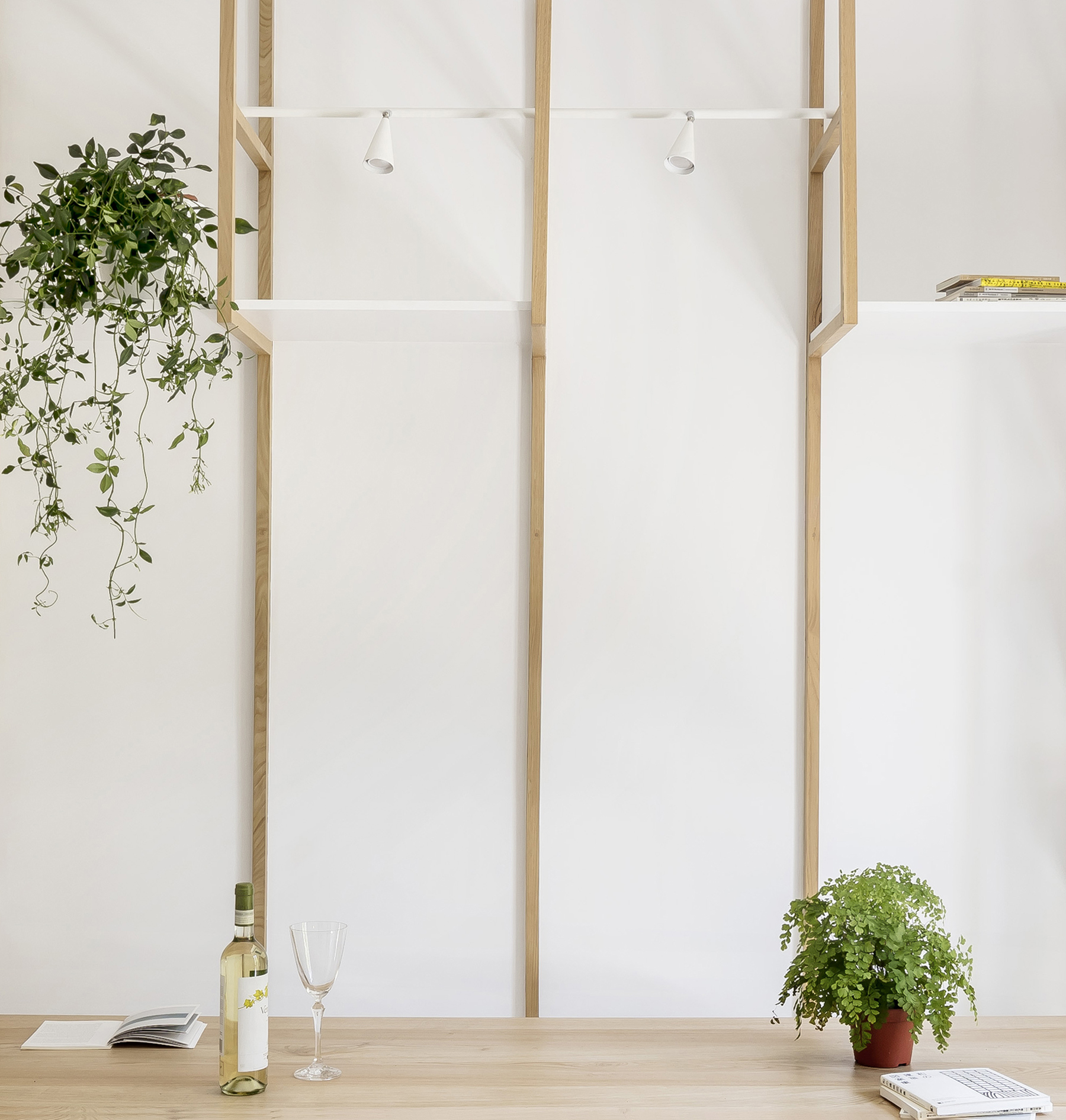 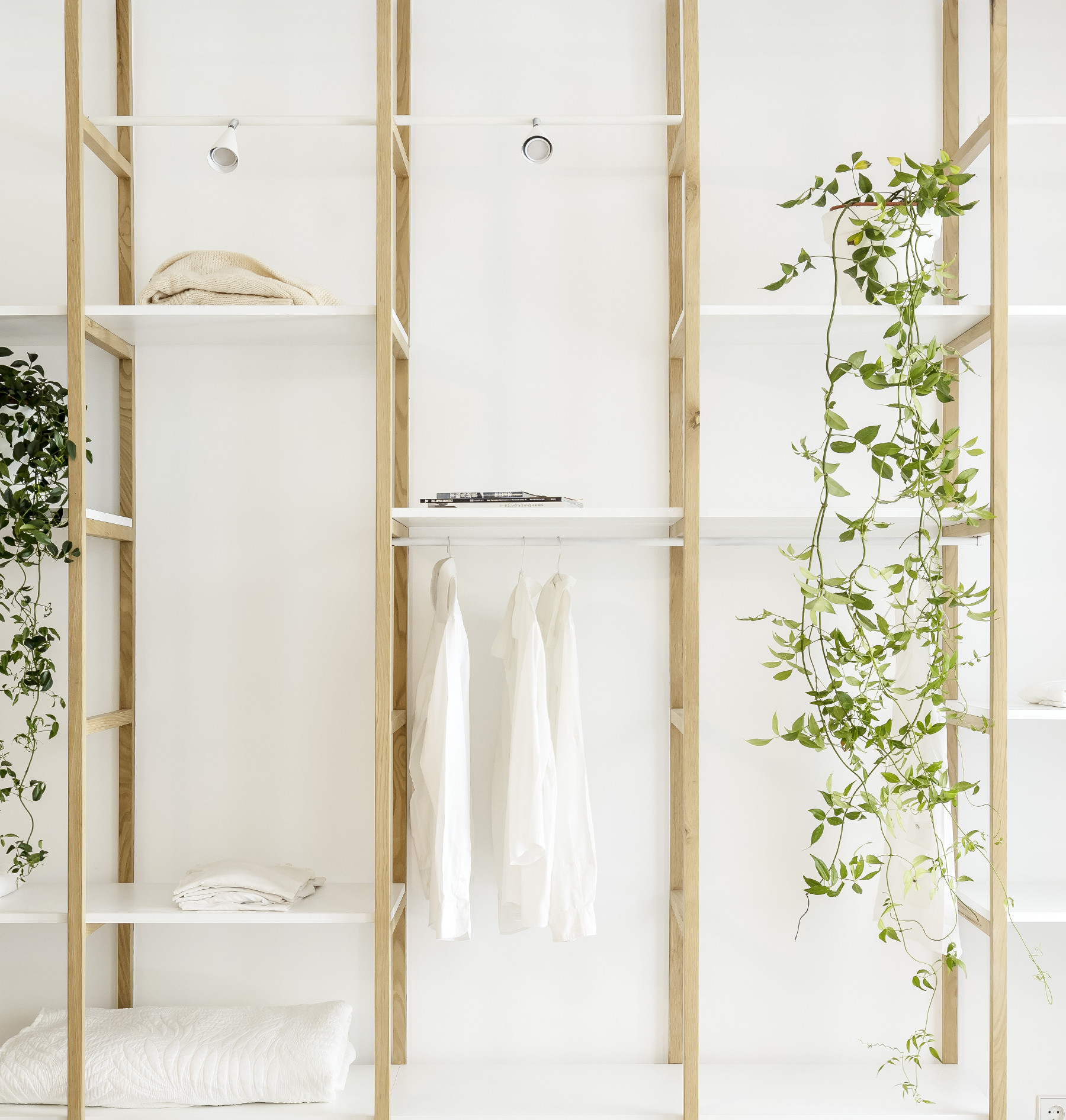 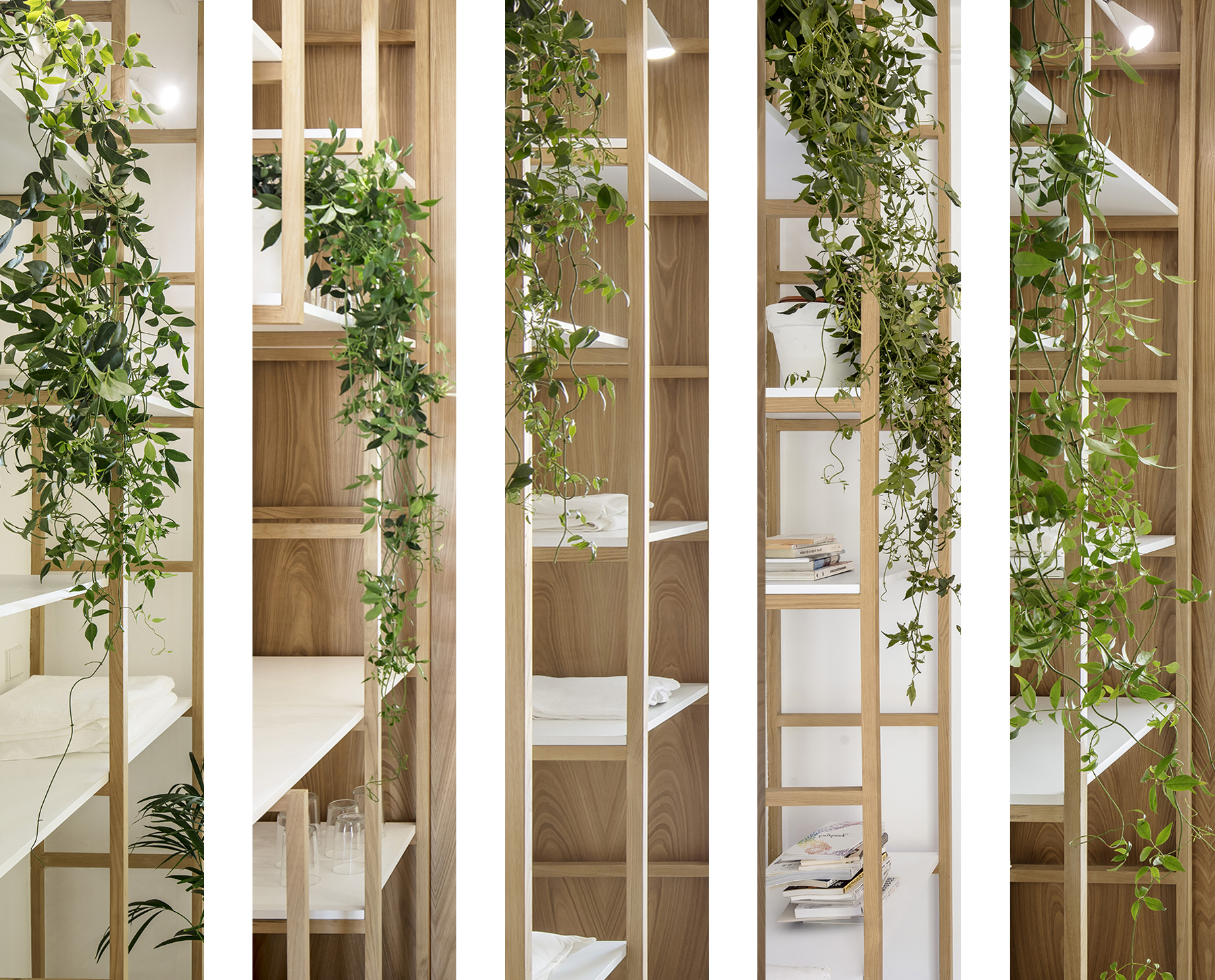 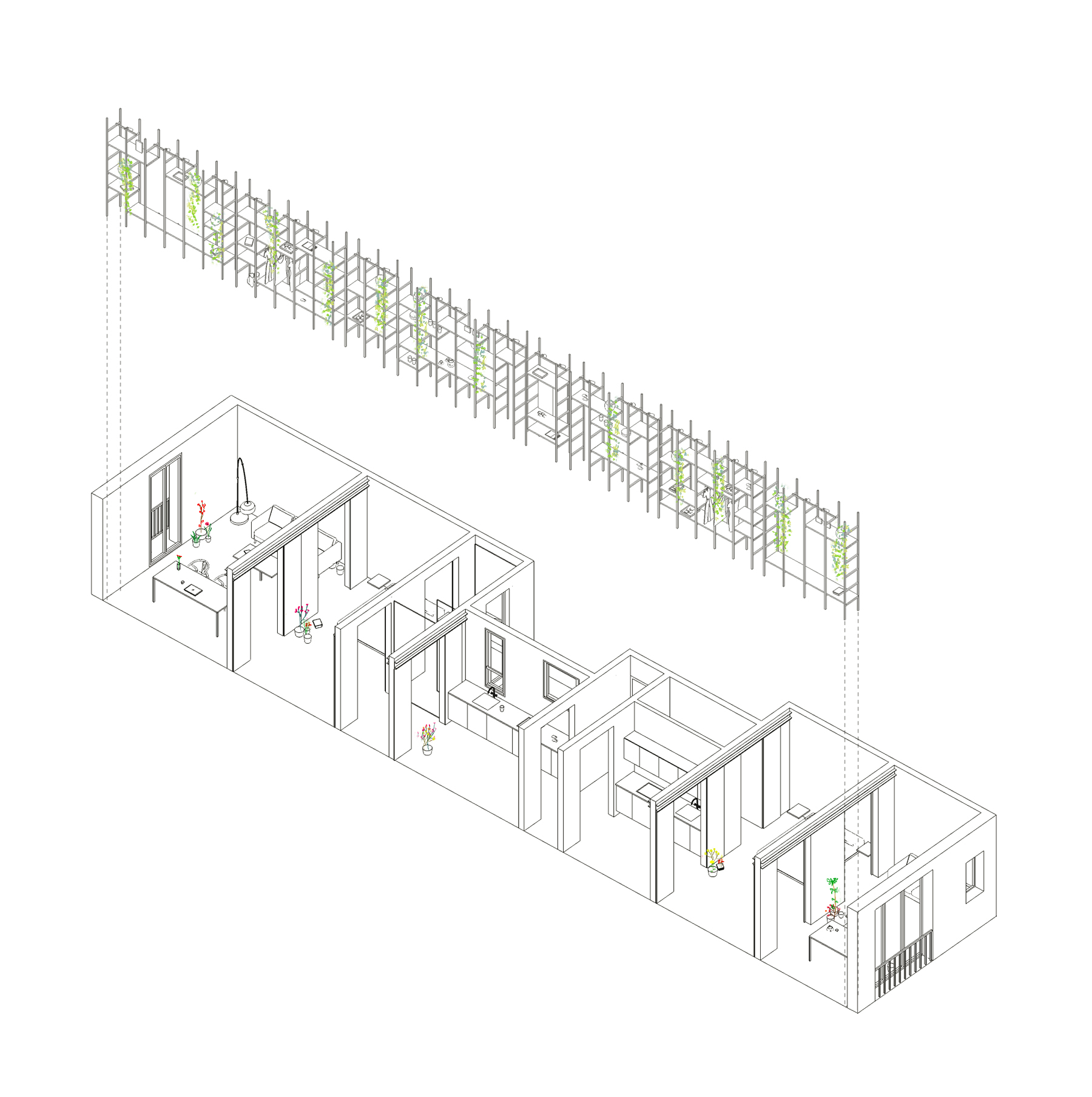 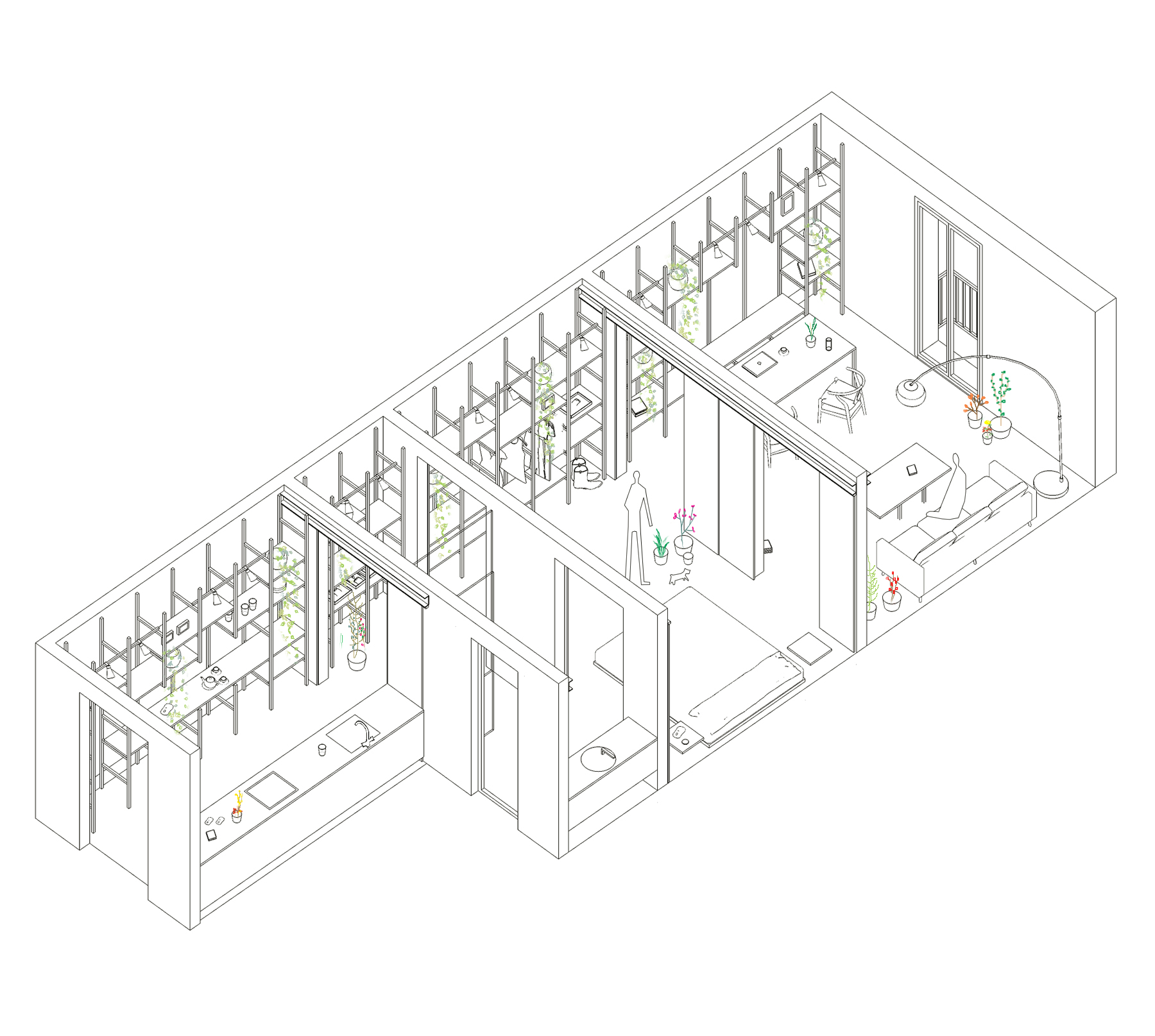 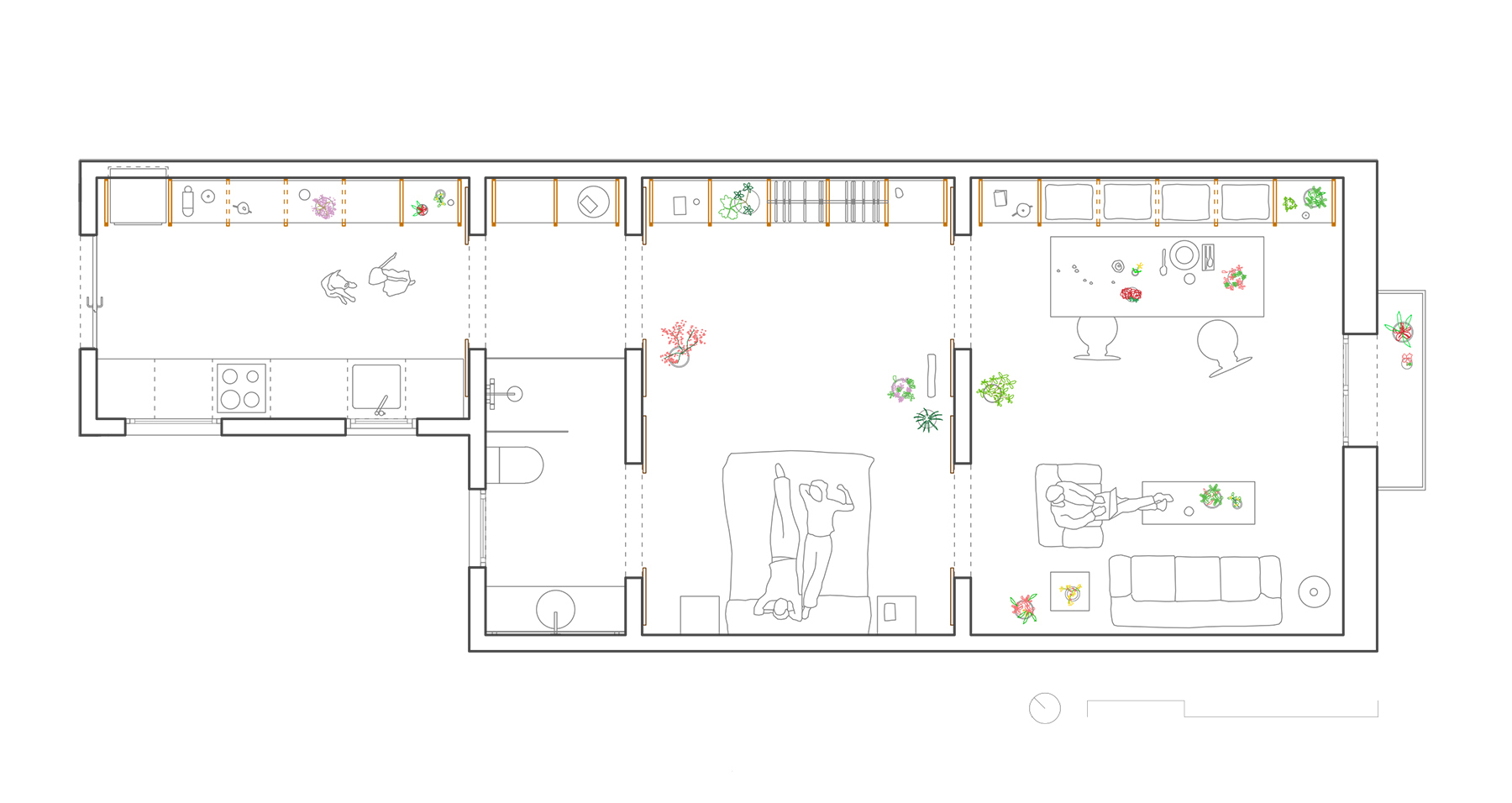 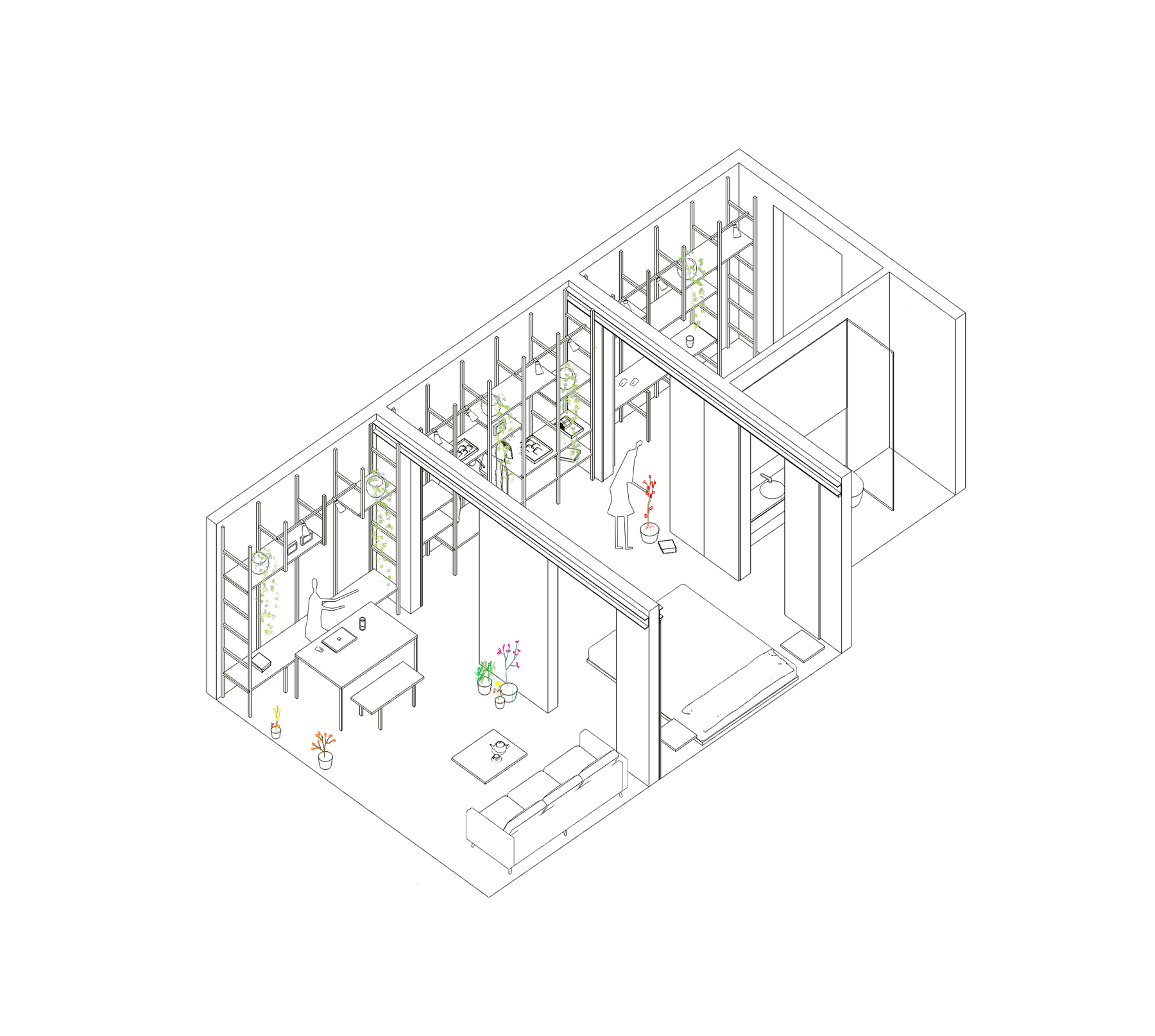 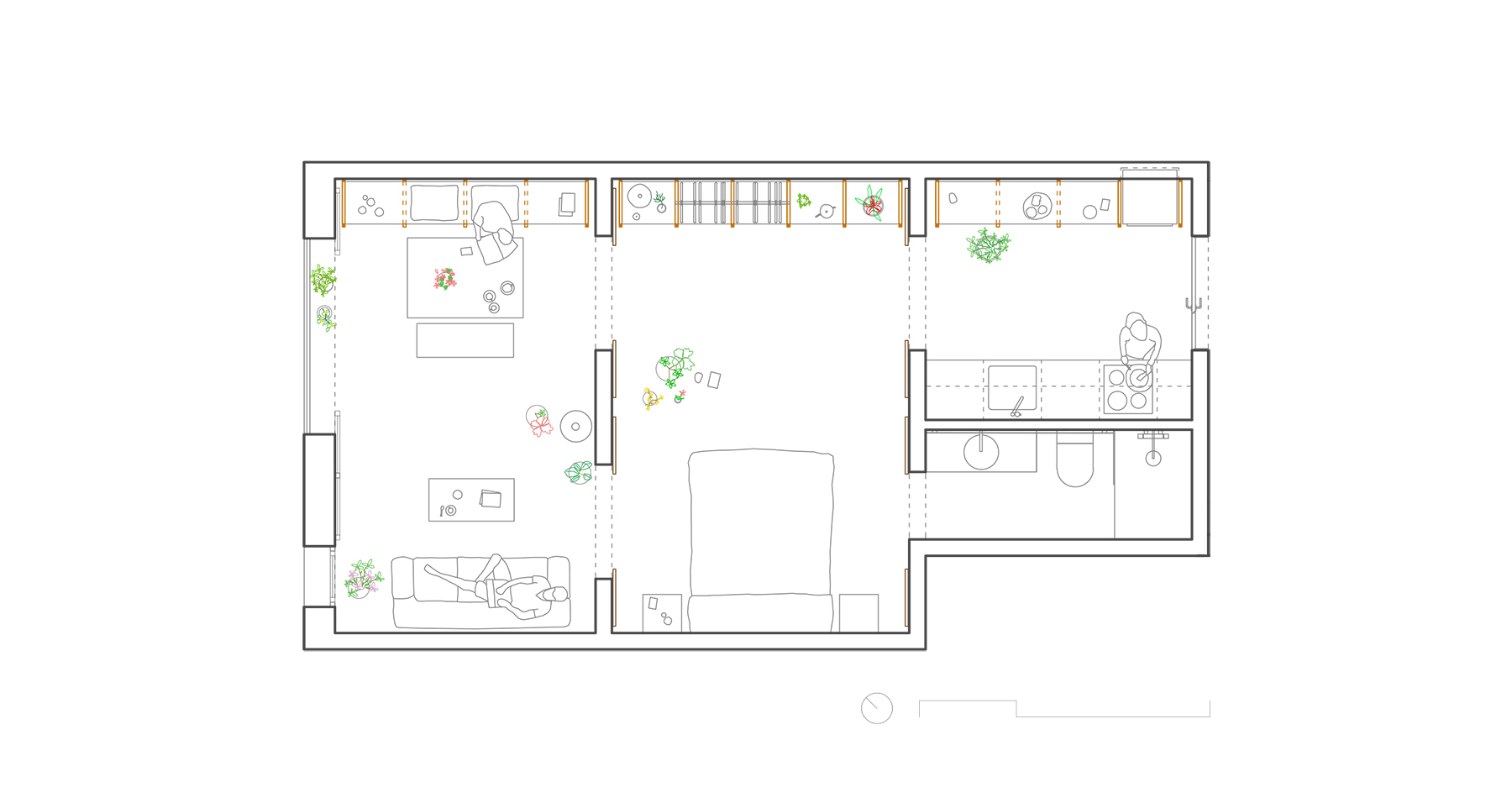 This project consists in the conversion of an 1880’s apartment into two lofts, located in the Sant Antoni district of Barcelona. A new housing scenery is created by a succession of rooms that connect the street to the courtyard through a system of sliding doors and porticos, reminiscent of the Japanese traditional house.

The original dwelling was totally compartmentalized by corridors and rooms barely connected to each other and to the outside. The first intention was to open up the space and recuperating the original high ceilings by demolishing the existent partition walls, floor and ceilings, increasing the incidence of natural lighting and promoting ventilation.

The design takes advantage of the building existent structure, formed by a sequence of load-bearing walls and wooden beams, to create a simple and poetic language that generates a flexible program. The load walls were all altered to achieve a repetition of an ordered geometry which establishes the limits in-between the different rooms. New openings were set up by structural reinforcements and apertures that were no longer needed were filled in.

This element is built again twice to meet the dwelling functional requirements; therefore, the existent structure defines the program while the program defines the modified structure. With this intervention a new 23 meters long visual crosses the space from the street to the courtyard, giving rise to a succession of thresholds and rooms related to the exterior that enhances the visual depth of the lofts.

The boundaries between the different spaces have the same ratio of wall surface and aperture, which opens the possibility for installing chestnut sliding doors that completely cover the white walls when there are opened. This system generates flexible and diffuse limits that create a dynamic composition where the rooms can be completely, partially or non-related to each other. When doors are closed, each room is an entity in itself, whereas when the doors open, each room is part of a complete entity.

Acting as light and shadow filters, the doors expand or contract the space while providing privacy to the inhabitants. These svelte elements give a new scale to the space emphasizing its vertical dimension. Another visual effect that provides the perception of being in a higher space is the fact that the apertures have the same proportion but larger dimensions than a conventional door.

The lofts storage needs are solved by an innovative 23 meters long shelving structure made of timber ladders with an in-between distance of 60 centimeters. The rungs of the 41 ladders support the white steel bars and the white lacquered wooden boards, which stabilize the horizontal loads of the system and have different functions depending in the height they are placed.

The program of the rooms defines the use of this modular light system; in the living rooms it serves as a large bench and a library, in the bedrooms it is an open wardrobe, in the laundry room it integrates the clothes dryer and washing machine, in the kitchens the shelves provide storage capacity, integrate the fridge and act as a kitchen bar and finally, in the lofts entrance hall the cupboard hides the boilers and electrical panels.

In coherence with the concept of rooms with exchangeable programs, the longitudinal storage unit can also be modified to meet the users’ requirements without altering its initial concept. Indeed, this flexibility opens the possibility to unify again the two lofts in a single dwelling.

The vertical rhythm of the ladders along the entire space gives a thickness to its perimeter wall while illuminating the interior. The white painted walls and ceilings, in addition to the continuous polished concrete floor, form the envelope of a scenery where light and time draw the subtle objects shadows. The space could be understood as a succession of perforated white boxes that makes the transition of natural lighting, giving the sensation of living inside large lamps that the sliding doors can turn on or turn off.

The hanging plants, in harmony with the chestnut structure, form a dynamic abstraction of trunks, brunches and leaves that brings life to the created atmosphere. At the same time, the presence of plants improves the interior air quality and regulates the humidity. The living, dead and inert material merge into a new domestic environment where the different degrees of temporal impermanence are reflected.